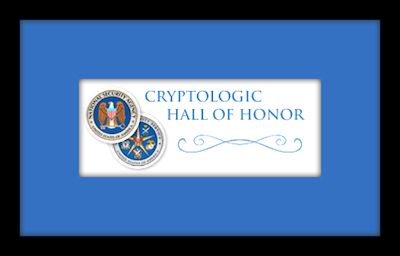 The making and breaking of codes and ciphers is a profession that demands intellect, patience, and imagination, while providing little recognition beyond the confines of the cryptologic community. That is why we participate in the NSA's efforts to honor those whose contributions to this discipline have been significant.

Members of the Foundation and its Officers and Board of Directors are well qualified to assess such contributions to cryptology, since they have long-term, intimate knowledge of the events and the people who have played significant roles in these events.

The Foundation makes nominations to the NSA Center for Cryptologic History of candidates for induction into the Cryptologic Hall of Honor. The Hall of Honor, exhibited in the NCM, was created in 1998 and pays tribute to Americans and others who have given especially distinguished service to the United States in cryptology and its related fields. The process is open to all individuals, military and civilian.

The Foundation invites your nominations for the NSA/CSS Cryptologic Hall of Honor. The nominee must have made significant contributions to the security of the United States in the field of cryptology either by one important achievement or contributions over a career. The nominee must be retired from active duty for a minimum of 10 years. The justification should be substantive and well written. You are encouraged to consult with others who worked closely with the nominee for input. Download the Hall of Honor Nomination Form.  Mail your nominations to NCF, PO Box 1682, Ft. Meade, MD 20755 or send via Email to the NCF (ncmf@cryptologicfoundation.org). Please note you can submit a nominee at any time and they will be considered during the next cycle. Should you wish to share this information with others - feel free to share a link to this page.

Need help preparing a nomination? Follow these TIPS FOR PREPARING A NOMINATION.

*** PLEASE NOTE - although many of the more recent honorees are featured below, this page does NOT include all of the individuals included in the Hall of Honor. To see all of those who have been recognized, please visit the NSA/CSS Cryptologic Hall of Honor page.

On October 16, 2020, five cryptologic pioneers were inducted into the NSA/CSS Cryptologic Hall of Honor. Please click on the individual's name or photo to learn more about them via their individual Hall of Honor page on the NSA website.

On Nov. 4, 2019, four cryptologic pioneers were inducted into the Cryptologic Hall of Honor at the National Security Agency. Gen. Paul M. Nakasone, Commander, U.S. Cyber Command, Director, National Security Agency / Chief, Central Security Service, presided over the ceremony and highlighted the achievements of each of the distinguished inductees. Please see below and click on each individual's photo to learn more via their NSA Hall of Honor page.

On 28 November 2018, a ceremony was held to honor the five most recent inductees to the NSA/CSS Cryptologic Hall of Honor. NSA/CSS Director GEN Paul M. Nakasone provided the Welcome Remarks and Presentations to Inductees. The event was narrated by NSA historian David Hatch. The inductees are featured below. Click on their photos or names to learn more about their careers and accomplishments via their respective NSA Hall of Honor entry.

The inductees are featured below. Click on their photos or names to learn more about their careers and accomplishments via their NSA Hall of Honor page.

On 29 October 2015, NSA announced that five "cryptologic greats" were inducted into the NSA/CSS Cryptologic Hall of Honor today at the National Cryptologic Museum (NCM). ADM Michael S. Rogers, Commander, U.S. Cyber Command, Director, National Security Agency/Chief, Central Security Service presided over the ceremony and highlighted the distinguished achievements of each of the inductees.

*** Click below on the individual's name or photo to read their full Hall of Honor entry on the NSA website.***

On 22 October 2014, the NSA announced that five "cryptologic greats" were inducted into the NSA/CSS Cryptologic Hall of Honor. Rick Ledgett, Deputy Director of the National Security Agency, presided over the ceremony at the National Cryptologic Museum, and NSA/CSS Director Admiral Michael S. Rogers joined the event by video conference to congratulate the families and friends of all inductees. Among the guests were the Polish Ambassador to the United States and other Polish officials. Members of Great Britain's intelligence and security organization, GCHQ, also attended.

*** Click below on the individual's name or photo to read their full Hall of Honor entry on the NSA website.*** 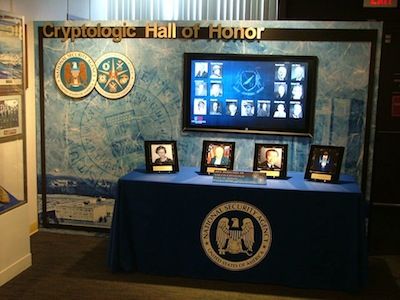 Three pioneers of American cryptology and a unique group of American citizens were inducted into the NSA/CSS Hall of Honor on 13 November 2013 at the National Cryptologic Museum. Inducted were: Ms. Vera Filby, Mr. Richard Proto, Mr. Washington Wong, and ALL of the Native American Code Talkers. Click on the honoree's name or photo to visit their Hall of Honor page.

Additional Honors: on 20 November 2013, Congressional Gold Medals, the nation’s highest civilian honor, were awarded honoring the service of hundreds of overlooked code talkers from 33 tribes. Although most of those who served have passed away, Edmond Harjo, 96, a member of the Seminole Nation of Oklahoma who served as a radio man with the 195th Field Artillery Battalion in France, was in attendance as were many representatives of Native American Tribes.

For more information on the contributions of these individuals or to see those inducted in prior years, visit the NSA/CSS Cryptologic Hall of Honor.