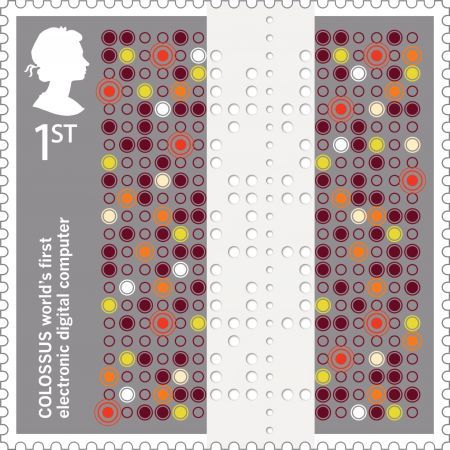 19 Feb 2014.
Article via The National Museum of Computing Web site.
Read the full article via the link below.

Veteran Colossus operators are delighted with the recognition of Colossus, the world’s first electronic computer, and its designer Tommy Flowers in the latest set of stamps issued by Royal Mail.

Royal Mail’s Inventive Britain stamp issue celebrates eight key inventions of the past century in disciplines and applications ranging from materials to medicine. One of the two first class stamps in the series celebrates Tommy Flower’s creation of Colossus. The series is released on 19 February 2015.

* A recording of the sounds of the Colossus Rebuild have recently been made by sound artist and composer Matt Parker and will be deposited in the British Library sound archives. Get a link via the TNMOC article.

Return to our Home page.
Click the "Return to List" link below to visit the Cryptologic Bytes Archives.