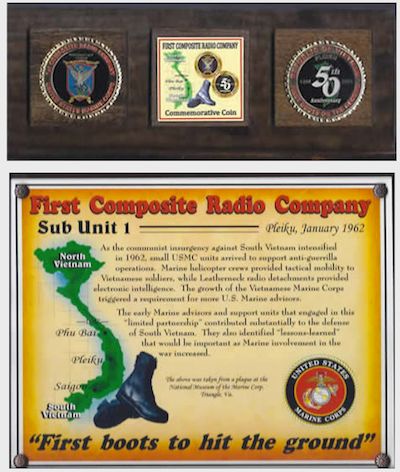 3 January 1962: Marine cryptologists began their service in South Vietnam with the arrival of Detachment A, First Radio Company Fleet Marine Force, which established itself at Pleiku. Visit the link included below to learn more about the pictured artifact.

Excerpt from 1st-radio-company-usmc website: In January 1962, by order of then Secretary of Defense McNamara, 1st Composite Radio Company deployed a detachment of Marines, identified as Sub Unit #1, to Pleiku, South Vietnam. Pleiku is located in the Central Highlands of South Vietnam (SVN) known militarily as II Corps. Established as a four month rotational (training) effort and being attached to the U.S. Army Security Group’s 3rd Radio Research Unit (3rd RRU) based at Davis Station, Saigon, SVN, the detachment’s mission was to gather information on the movements, disposition and assist in developing the intentions of North Vietnam and Viet Cong military organizations in support of the 3rd RRU and U.S. forces in Vietnam. The unit was billeted at an Army of Vietnam’s base which also housed U.S. Military Army Advisory and Assistance Group.