"A Virtual Afternoon at the Museum"

The 2020 NCMF General Membership Meeting (GMM) & Annual Symposium was held virtually on 22 October (via Zoom) due to the COVID-19 pandemic. The theme was "A Virtual Afternoon at the Museum." Please see the agenda below, as well as a summary of the keynote presentation, information about the speakers and their book, and a link to a full event summary. Photos coming soon.

This presentation builds on themes in our new book, The Use of Force for State Power: History and Future (Palgrave Macmillan, 2020). The post-Cold War world has failed to deliver on perpetual peace and dictators seem to have regained strength. We believe this is because the Information Revolution has given anti-liberal regimes new technological and ideological opportunities that allow them to employ new tools to build power and wield force. We were struck by the ways in which ancient and contemporary views of power and force sound so similar, and we explored why it is that military services and intelligence agencies today operate (even in cyberspace) in ways that would have seemed familiar to Aristotle or Sun Tzu. We conclude that rulers use force in very similar ways, preventing foes from concerting their actions, especially by eliminating the trust that should bind them. In short, they make enemies afraid to cooperate.

Our conceptual framework of force applies in both military affairs and internal security matters. Two of the key factors we identify -- comprehension and conveyance -- relate to cryptology in particular, for they enable leaders to understand their security environments, to cooperate with allies, and to control their forces. These principles, furthermore, extended organically into cyberspace, which now provides forces and regimes direct access to their adversaries' sources of power. We suggest a likely direction for future conflict, with actors increasingly able to employ cyber-enabled tools to tell friend from foe even at an individual level, and regimes using these means for internal control and the intimidation of opponents abroad.

About the Keynote Speakers

Dr. Michael Warner serves as an historian in the US Department of Defense, and has written and lectured on intelligence and cyberspace history. He is in his fourth decade of service as a civilian employee of the US Government, and has also taught adjunct at American University, Columbia University, and Johns Hopkins University.. His third book, The Rise and Fall of Intelligence: An International Security History, was published in 2014. He sits on the Board of Editors of the peer-reviewed journal Intelligence and National Security.

John Childress is a U.S. Army Lieutenant Colonel who has served as a ground commander in Iraq and Afghanistan. During his twenty years in uniform he has also served as a military fellow in the office of Congressman Elijah Cummings and as an Assistant Professor at the United States Military Academy at West Point, where he taught politics and political philosophy. He currently teaches in the Department of Political Science at the United States Naval Academy. 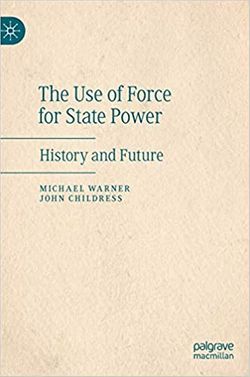 The Use of Force for State Power: History and Future studies force, the coercive application of power against resistance, building from Thomas Hobbes’ observation that all self-contained political orders have some ultimate authority that uses force to both dispense justice and to defend the polity against its enemies. This cross-disciplinary analysis finds that rulers concentrate force through cooperation, conveyance, and comprehension, applying common principles across history. Those ways aim to keep foes from concerting their actions, or by eliminating the trust that should bind them. In short, they make enemies afraid to cooperate, and now they are doing so in cyberspace as well.