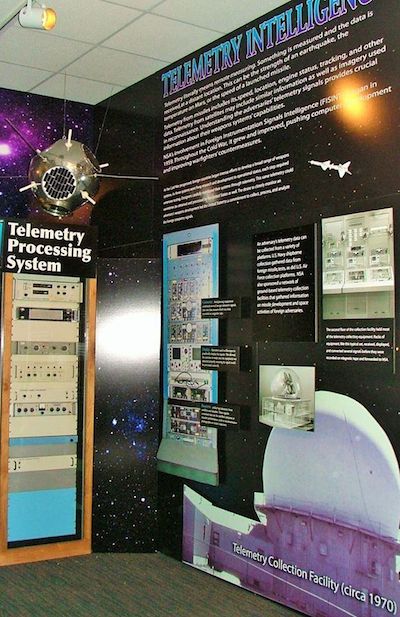 Now known as the “ANDERS Telemetry Intelligence” exhibit, the display explains the importance of gathering information about an adversary’s missile and space capabilities so that leaders can make informed decisions for defense policies.

DoD ANDERS Station was located on Shemya Island, in the Aleutian island chain, in Alaska, in the late 1960s and early 1970s. ANDERS housed the HARDBALL telemetry data collection system. In the exhibit photo featured here, you can see the ANDERS facility pictured at the bottom right corner, and the HARDBALL equipment is also visible in the photograph. See additional photos located below.

The small (actual size) earth satellite in the upper left corner of the exhibit is of the U.S. GRAB satellite. This satellite was developed by the U.S. Navy Research Laboratory (NRL) and performed Electronic Intelligence ELINT data collection of Soviet early warning radars. The image of the "Telemetry Processing System" equipment rack shown below the satellite is part of the RISSMAN equipment (developed and assembled by NSA) which processed some of the telemetry data collected by the HARDBALL equipment.

To learn more about ELINT, read the Center for Cryptologic History's publications "Telemetry Intelligence (TELINT) During the Cold War," as well as, "Electronic Intelligence (ELINT) at NSA."