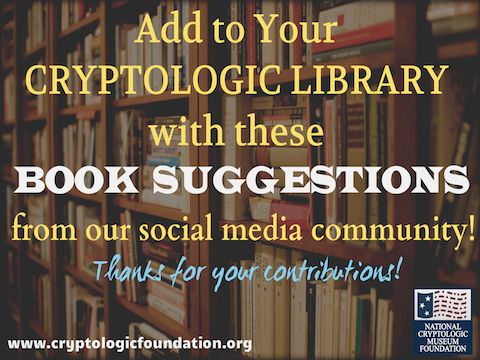 Recently on Twitter and Facebook, we asked our community what book titles they would recommend from their personal library of cryptology-related books. For one of our Twitter friends, this meant choosing from his collection of 132 titles! WOW!

We thought we would provide a listing of the titles shared for those who might want to refer back for reading material suggestions. Any errors in title or author name are our errors in translation. Many thanks to those of you who shared recommendations. If you would like to suggest a title to be added to this list, please email webadmin@cryptologicfoundation.org

From the library of Howard C (@borneobat on Twitter)

From the library of @PayneHarrison

From the library of @geoffsengine

Codebreakers: Arne Beurling and the Swedish Crypto Program During WWII by Bengt Beckman

From the library of @Alsweigart

From the library of @Matthew_d_Green

From the library of Tony Arciere (@bascule)

Crypto by Stephen Levy
Cryptography Engineering by Schneier and Ferguson

From the library of Ollivier Robert (@keltounet)

The American Black Chamber by Herbert O. Yardley (also a favorite of Art la flamme @artlaflamme)
And I Was There: Breaking the Secrets - Pearl Harbor and Midway by Rear Admiral Edwin T. Layton
Secret Missions

From the library of @tweetdkp

The Design of Everyday Things by Don Norman

From the library of Dick Paronto

The Ultra Secret by Winterbotham

From the library of John F. Dooley

From the library of Steve Bellovin @Stevebellovin

From the library of Allen D. Dayton

Enigma: Ou La Plus Grande Enigme De La Guerre 1939 - 1945  by Gustave Bertrand *** This is the book that first spilled the beans even before Winterbotham's book -- In French
Kahn on Codes: Secrets of the New Cryptology by David Kahn
Enigma: How the German Machine Cipher was Broken and How it Was Read by the Allies in World War II by Wladyslaw Kozaczuk
Delusions of Intelligence:  Enigma, Ultra, and the End of Secure Ciphers by R.A. Ratcliff
GCHQ: The Secret Wireless War 1900-86 by Nigel West
The SIGINT Secrets: The Signals Intelligence War 1900 to Today Including the Persecution of Gordon Welchman by Nigel West
The American Codebreakers: The U.S. Role in ULTRA by Thomas Parrish
The Ultra-Magic Deals: And the Most Secret Special Relationship, 1940-1946 by Bradley F. Smith
The Secret War: The Inside Story of The Code Makers and Code Breakers of World War II by Michael Patterson
The Eavesdroppers: The Best Kept Secret of World War 2 by Jack Bleakley
MacArthur's Ultra: Codebreaking and the War Against Japan, 1942-1945  by Edward J. Drea
Marching Orders: The Untold Story of World War II  by Bruce Lee
Enigma: How the Poles Broke the Nazi Code  by Wladyslaw Kozaczuk and Jerzy Straszak
Venona: The Greatest Secret of the Cold War by Nigel West
The Story of Decipherment: From Egyptian Hieroglyphs to Maya Script by Maurice Pope
Very Special Intelligence by Patrick Beesly
From Fish to Colossus: How the German Lorenz Cipher was Broken at Bletchley Park by Harvey G. Cragon
War Secrets in the Ether by Wilhelm F. Flicke
The Enigma Symposium 1998 Edited by Hugh Skillen
The Enigma Symposium 1999 Edited by Hugh Skillen

The Woman Who Smashed Codes: A True Story of Love and the Unlikely Heroine Who Outwitted America's Enemies by Jason Fagone

Check out the "On This Date in History" calendar for historic events related to cryptology, math, computers, and more.