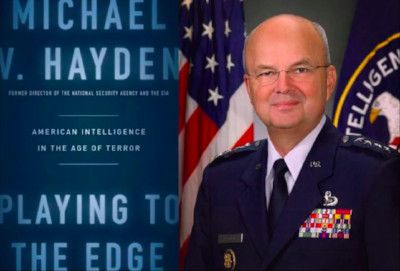 We were very proud to feature former DIRNSA and Director, CIA, General Michael Hayden as the guest speaker for our 2016 Summer Cryptologic Program on 25 July in Annapolis Junction, MD.

During the presentation, General Hayden discussed the reasoning behind his responses to terrorism and other challenges the United States faced as the technological revolution proceeded. He defended these decisions strongly and provided counter arguments to accusations of wrongdoing which regularly appeared in the media in the wake of the Snowden revelations. One of the key players in the modern world of intelligence, he provided an unvarnished view of what is required to defend the US from the many threats it faces and why is is necessary to take unpopular measures to protect this nation and its allies.

The program included a luncheon and a book signing with Gen Hayden who signed copies of his book, Playing the to Edge: American Intelligence in the Age of Terror, published in early 2016. Read the NY Times book review.

Learn more about our guest speaker after the photo gallery included below.

Click on the images below for a larger view

From April 21, 2005–May 26, 2006 he was the Principal Deputy Director of National Intelligence, the first person to serve in that position, and a position which once made him “the highest- ranking military intelligence officer in the armed forces.” He was director of the National Security Agency (NSA) and Chief, Central Security Service, from 1999–2005, the longest in the history of the agency. He was Director of the Central Intelligence Agency [May 2006 to Feb 2009], and has a long and distinguished career in the US Air Force.

General Hayden served as Commander of the Air Intelligence Agency and as Director of the Joint Command and Control Warfare Center. He has also served in senior staff positions at the Pentagon, Headquarters U.S. European Command, National Security Council, and the U.S. Embassy in the People’s Republic of Bulgaria. The general has also served as Deputy Chief of Staff, United Nations Command and U.S. Forces Korea.

He is currently a principal at the Chertoff Group, a security consultancy founded by former Homeland Security Secretary Michael Chertoff. Hayden also serves as a Distinguished Visiting Professor at George Mason University School of Public Policy. He is the author of Playing to the Edge: American Intelligence in the Age of Terror [Penguin Press, February 2016] which presents Hayden’s guiding principle when he ran the NSA, and remained so when he ran CIA. In his view, many shortsighted and uninformed people are quick to criticize. Playing to the Edge is an unapologetic insider’s look told from the perspective of the people who faced awesome responsibilities head on, in the moment.