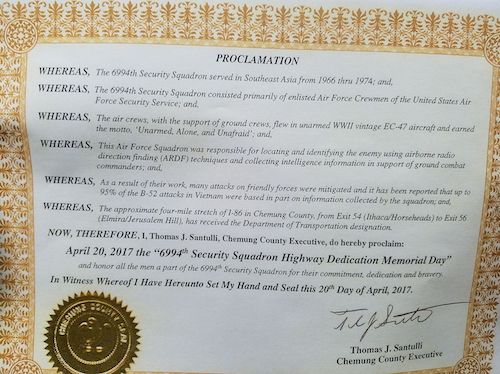 On Thursday, 20 April 2017, a four-mile stretch of I-86 in Chemung County, NY was officially designated as the “6994th Security Squadron Memorial Highway." The designation ceremony took place at the Wings of Eagles Discovery Center in Horseheads. Pictured here is the official proclamation - click here for a larger view.

The ceremony follows the 2016 enactment of a new law (S5582/A9664, Chapter 366 of the Laws of 2016) sponsored by State Senator Tom O’Mara (R,C,I-Big Flats) and Assemblyman Chris Friend (R,C,I-Big Flats) at the request of Joseph Giammichele of Horseheads, who served with the 6994th and is currently one of its alumni officers.

In a joint statement, O’Mara and Friend said, “The flight crews and support personnel of the 6994th Squadron served our nation throughout the Vietnam War admirably and with amazing courage. We’re proud to remember, honor and pay tribute to their service and bravery. We hope that the designation of the ‘6994th Security Squadron Memorial Highway’ will stand as an expression of our nation’s enduring gratitude and respect.”

From the 6994th Security Squadron website, “The 6994th Security Squadron served in Southeast Asia from 1966 thru 1974. The air crews, with the support of our ground crews, flew in unarmed WWII vintage EC-47 aircraft and earned the motto, ‘Unarmed, Alone, and Unafraid.’ This Air Force Squadron was responsible for locating and identifying the enemy using airborne radio direction finding (ARDF) techniques and collecting intelligence information in support of ground combat commanders. As a result of their work, many attacks on friendly forces were mitigated and it has been reported that up to 95% of the B-52 attacks in Vietnam were based in part on information collected by the squadron. This squadron is still the most highly decorated squadron in the history of the current 25th Air Force and all of its predecessor organizations.”

Read more about the Squadron on their website at: www.6994th.com.