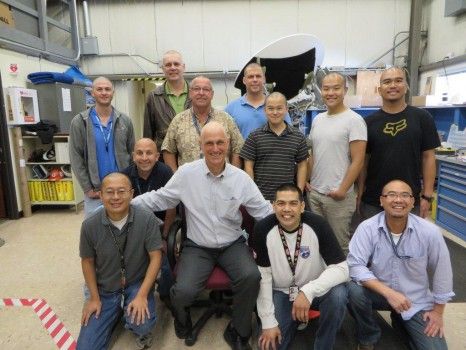 Meet the Scientists is an Armed with Science segment highlighting the men and women working in the government realms of science, technology, research and development. The greatest minds working on the greatest developments of our time. If you have someone you’d like AWS to highlight for this segment, email Jessica L. Tozer at science@dma.mil.
Left to right: Assistant Secretary of the Navy for Research, Development and Acquisition (ASN RDA) Sean J. Stackley, SSC Pacific's Signals Intelligence Antennas Team award winners Rob Horner, Leon Lin, Dennis Bermeo, Robbi Mangra, Susie Morales, and Dr. Delores Etter pose for a photograph at the ASN (RDA) Dolores M. Etter Top Scientists and Engineers of the Year award ceremony held June 6 at the Pentagon. Not shown, Hale Simonds. (Photo from SIGINT antenna team/Released)

WHO: The whole SIGINT Antenna Team from SSC Pacific! Specifically, I spoke with Susie Morales, project manager for the SIGINT antenna team.

TITLE: What is SIGINT, you ask? Well it stands for Signal Intelligence. This team, specifically, is the intelligence, surveillance, and recognizance, electromagnetic systems technology branch at SSC Pacific. As an acronym (because how could we not acronym that, am I right, military?) it’s the ISREM Systems Technology Branch.

MISSION: The SIGINT Antenna Team’s cutting-edge shipboard antennas take full advantage of the electromagnetic and cyber environment, enabling Navy ships to find, intercept, and track signals across the range of Navy operational missions. This awesome team is a recent recipient of SPAWAR’s Delores Etter 2013 Top Scientists and Engineers of the Year Award, and from what I understand, they’re just getting started.

So tell me a little bit about your team and its mission.

“Our branch is essentially an antenna development branch. We design, prototype, integrate, test, deploy and transition antennas to the fleet. Our prime focus is in signal intelligence for the warfighter. We develop antennas from a concept addressing technology needs into a demonstrable capability, which we then transition to the fleet.”

What is the antenna team’s role regarding signal intelligence?

“SSC Pacific’s mission is to enable information dominance for our Naval, Joint, National and Coalition warfighters through the research and development, delivery, and support of integrated capabilities. That’s our Center’s mission statement. Our team fits into that mission, by providing SIGINT antenna technology.”

“We want to be enhance the ‘ears’ of the Navy, enabling the warfighter to detect and exploit signals of interest.”

“Usually the antenna is the last thing people think about in developing an integrated system, but without it, you can’t hear things out there; you can’t intercept those signals. We want to detect those signals and act quickly upon them. There are challenging signals out there we want to know about for battle space awareness and information dominance.”

“What we try to do is forward think, and look at how we can improve the current capabilities of our fleet in the area of antenna technology: what systems will to be fielded, what systems are being considered for the future, and how can we impact these by providing better capabilities to our warfighter. Whether it’s making something smaller, with a wider frequency range, or providing more power on target, or whatever that may be, we look at the requirements, or what systems under consideration, their requirements and strive to meet technology needs. Our team works to do this faster, and less expensive, and better, while providing improved capabilities to the warfighter.”

What do you hope your work or mission will achieve?

“We hope the antennas we develop and transition to the fleet will detect and exploit critical and challenging signals and systems of interest, and that this gives the warfighter the tools to have the competitive tactical advantage.”

In your own words, what is it about the work that the SIGINT antenna team is doing that makes it so significant?

“We have been very successful in designing, developing, integrating, testing, deploying and transitioning next generation antenna technologies to the U.S. Navy. Our Center is fundamentally a research and development lab, but what makes our team unique is in addition to developing something from concept to capability, we actually field these antennas to the fleet. When you can go and look out on the San Diego bay, and see a cruiser go by, and you can see our antennas installed on the mast.”

That must be very fulfilling.

“It has made us realize how important this work is to the warfighter. We take the warfighter and the fleet seriously in our group. Even after something is fielded, if questions come back or we need to support an installed antenna, we prioritize this. There are times when we get a call from a ship saying they need direct assistance and we respond with whatever support is needed. We always remember that that’s our end goal. We’re funded by sponsors, but the warfighter is the ultimate customer.”

Let’s talk about how the warfighter uses the technologies – and the information – that you give them. How do the antennas you create directly aid the military, or help with military missions?

“We’re the ears that enable the systems to do their jobs, to gather and collect the information, as well as allowing the warfighter to maintain their situational awareness. Without that, it would be like trying to have a conversation and having no hearing. You can’t understand what someone is doing or saying if you do not have the tools you need to take in the information.”

What do you think is the most impressive or beneficial thing about the SIGINT mission and why?

“It’s enabling a capability for the warfighter to gather the intelligence required to maintain a tactical advantage. We are providing the antenna capabilities for the fleet to have the tactical superiority and information dominance out there.”

So what got you interested in this field of study?

“I started out here at the center 32 years ago as a secretary. Some of the great things about our center are the opportunities to become something you never dreamed of becoming. That was the case for me. I never thought, in a million years, that I would ever be an engineer, let alone a project manager. Through various mentors and opportunities provided here at the center, I got my two-year electronics degree, and enjoyed it a great deal. Then, while working, I got my 4 year engineering degree. 15 years ago, I joined the antenna team, and through them got involved in antenna design. I am blessed, really, to be here at the center. I went from being entry level – a student, really – to being a project manager. So it can happen to anyone. Even if it’s not your dream, you can always make it your dream.”

“It’s never too late to dream and become something you never expected yourself to become.”

“I’d like to share an experience that really reflects how our team is really a team. Everybody can say they work on the greatest team, but our team really is more like a family. We’re not just coworkers. And what really drives this home is the story of our branch head, Hale Simonds. He was one of the recipients of our Assistant Secretary of the Navy for Research, Development and Acquisition (ASN RDA) Sean J. Stackley award. That award would not have happened without him. He would provide some initial promising concepts and we would have the opportunity to design and develop them into realizable and physical products.”

The humanity behind the science.
Hale Simonds (center) is surrounded by teammates who shaved their heads in a show of solidarity with him after his diagnosis of Stage 3 non-Hodgkin's Mantel Cell lymphoma. Simonds' team works to take full advantage of the electromagnetic and cyber environment, enabling Navy ships to intercept, locate, and track enemy communications across the gamut of Navy operational missions. (Photo by Karin Kenyon/Released)

Hale Simonds (center) is surrounded by teammates who shaved their heads in a show of solidarity with him after his diagnosis of Stage 3 non-Hodgkin’s Mantel Cell lymphoma. (Photo by Karin Kenyon/Released)

“Last year, he was diagnosed with cancer. In spite of that, and while going through chemo, he still came into work. So, he started losing his hair after a few sessions of chemo. The guys on the team decided to surprise him by shaving their heads. Twenty of our guys all shaved their heads.”

“Hale’s a very strong, stoic man. Passionate, but not emotional. This brought him to tears. That’s what I mean, we’re a family. It’s not just that we work well together, and produce a product for the Navy, but we also really care about each other.”

Thanks to Susie Morales and the entire SIGINT team for contributing to this article, and for their contributions to the science and technological communities.

This story is dedicated to Hale Simonds; a man who inspired a technology – and a team – to become greater than the sum of their parts.
__________

Jessica L. Tozer is the editor and blogger for Armed with Science. She is an Army veteran and an avid science fiction fan, both of which contribute to her enthusiasm for science and technology in the military.