The "Blue Cube" is Coming Down 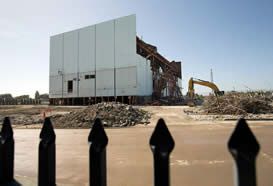 SETTING THE RECORD STRAIGHT (publ. 4/18/2014)
An earlier version of a story about the demolition of the former Onizuka Air Force Station's "Blue Cube" incorrectly reported details about the station's operations. The operations had tracked U.S. satellites that spied on the former Soviet Union.

Article by Becky Bach for the San Jose Mercury News

"I wish I could tell you more," said Ken Murray, superintendent with contractor C.W. Driver. But he couldn't, or wouldn't.

The Onizuka station was shuttered in 2011, a victim of the fifth round of military base closures, with some of its remaining operations transferred to Vandenberg Air Force Base in Southern California. The ceremony marking its closure featured a color guard, a brass band and remarks from a top general, local officials and the widow of the base's namesake before dozens of onlookers.

But no one besides demolition crews attended this week's major dismantling of the landmark structure, though a few former employees tried. On Wednesday amid cranes and excavators were piles of rubble surrounding what was left of the cube, whose distinctive light blue tiles already had been partially removed.

Although huge chunks of what is formally known on the former base as simply Building 1003 were demolished this week, Murray said taking down the structure began in September with the removal of hazardous materials. Twenty buildings at the former station near the intersection of highways 101 and 237 in Sunnyvale have already been demolished, he said.

For decades, the Blue Cube housed the Air Force's operations center for reconnaissance satellites as well as space missions, including the Discovery space shuttle in 1985. So secretive was its work that in 1968, even the vice president of the United States, Hubert Humphrey, was initially denied entry to the facility.

In the 2010 base closure ceremony, Lt. Gen. John Sheridan said he could still not talk about much of what went on within the Blue Cube.

"What I can tell you is that the operations conducted by the NRO, or National Reconnaissance Office, from this site have made our nation a tremendously safer place to be," Sheridan said.

Originally known as the Air Force Satellite Test Center, the station was renamed after astronaut Ellison Onizuka, who died in the Challenger shuttle explosion in 1986.

The bulk of the 19-acre site is slated for a 50,000-square-foot education center operated by the Foothill-De Anza Community College District. The district plans to relocate some of the facilities at the leased Middlefield Campus in Palo Alto to offer tech-focused programs in 2016, Foothill officials have said.

"The architect paid homage to the Blue Cube by making the architecture reminiscent in shape and color," Thor said.

The center will retain the memorial to astronaut Onizuka and incorporate the structure's well-known blue tiles into a pathway.

The former Onizuka Air Force Station, home of the "Blue Cube" satellite tracking facility is in the process of being razed in Sunnyvale, Calif. on Wednesday, April 16, 2014. (LiPo Ching/Bay Area News Group)
The city of Sunnyvale, the Department of Veterans Affairs and two low-income housing developers also secured portions of the former base.

The city plans to swap the site of Fire Station No. 5 at the intersection of Mathilda Avenue and Innovation Way with the Jay Paul Co. in exchange for a 2-acre site nearby on Borregas Avenue to build a public safety training center and fire station, said Hanson Hom, Sunnyvale community development director.

The VA intends to retrofit an existing building for office space. It also offered to host a public display of photos and other materials from Onizuka, Hom said.

The city worked with low-income housing providers MidPen Housing and Charities Housing to trade the Onizuka land for space at the former National Guard Armory on Maude Avenue. The city hasn't decided what to do with its remaining 4.6 acres, although it could be used for a hotel or playing fields, Hom said.

Blue Cube demolition will extend through next week, contractor Murray said. After that, one of Silicon Valley's most distinctive landmarks will have gone the way of the orchards that once blossomed throughout the area.