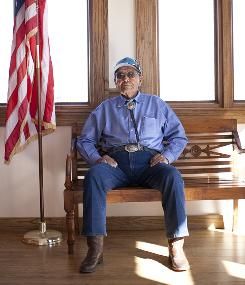 Keith Little and Frank Chee Willetto know time is no longer on their side.
That's why the men, World War II veterans who used a code based on the Navajo language to stump the Japanese in battles, spend their days reminding the world of their contribution to ending the war.

As the numbers dwindle — fewer than 100 Code Talkers of the 400 trained by the U.S. military are believed to be alive — the Navajo veterans are being recognized. Today, Veterans Day, a group of them will ring the opening bell at the New York Stock Exchange. New Mexico dedicated a 16-mile stretch of highway to them on Wednesday.

Now, 65 years after serving mostly in the Pacific, the men are trying to establish their legacy on the Navajo reservation in Arizona. Through a foundation, they are about to launch a $42 million fundraising campaign for a museum and veterans center.

"We are all old, and we want to see the result of our efforts," says Little, 86, a retired logger.

The museum has been more than 10 years in the making, says Willetto, 85. The group had the land but no money. Their efforts were boosted in 2008 with a grant of about $900,000 from the Navajo tribal government to help them form the foundation, design the project and conduct geological tests on the land.

Yvonne Murphy, secretary of the Navajo Code Talkers Association and daughter of a Code Talker, says they are pressed to get started because the average age of the men is 86.

Of the first group of 29 who devised the code for the Marine Corps in 1942, only two remain. Murphy chokes up noting that a Code Talker who served with her father was hospitalized recently and won't be able to make any Veterans Day appearances.

"For us, the descendants, the children of the Navajo Code Talkers, we want to see our fathers' dreams come true," she says. "We want to have a place to go to learn about these men and their historic feats."

The foundation has a list of 45 Code Talkers who are still alive, but she says there could be as many as 70.

"It's hard to get a handle on how many are living," Murphy says. "Most don't want to talk about it. People still don't know what they did. We get calls from people saying they didn't know their father was a code talker. They found his uniform after he died."

It didn't help that the men were told by the military not to talk about their service and their work remained classified until 1968, says Zonnie Gorman, the daughter of a Code Talker who has recorded an oral history of their work. Her father, Carl Gorman, was one of the original 29 who devised the code.

The idea for the Code Talkers is credited to Philip Johnston, the son of a Protestant missionary who grew up on the reservation and spoke the language. He convinced the Marines they could enlist the Navajo as messengers, using their language to allow platoons to communicate quickly and securely.

The Code Talkers devised a complex system assigning Navajo words for each letter of the English alphabet and for names of military weapons, equipment and other phrases. Some phrases resembled the things they described. The Navajo word for tortoise, chay-da-gahi, meant tank, and ne-he-mah, which means our mother, meant America. Other words were spelled out using Navajo words to represent letters of the alphabet.

"The military had to coordinate tactical operations on the fly, so they hit on an ingenious solution, to use a language that no one understands, that there are no books for," says Geoffrey Wawro, who teaches military history at the University of North Texas. He says the code was used mostly in the Pacific Theater, where platoons made hard landings on beaches and lacked the elaborate equipment that could protect secret communication. The Japanese never broke the code. "It was one of the many ingredients for success," he says. "It helped reduce Marine casualties."

Little enlisted in the Marines at 17 and served as a radioman in the battle of Iwo Jima. "Iwo Jima was tough during the landing. We had to run to the beach," he says. "You were being shelled by aircraft and ships." He says he spent about a month sending messages about troop positions, equipment needs and enemy movements to military ships and other platoons on the island. After the war, he says, it was years before he knew the importance of the service he and other Navajo provided.

The irony that their language helped win the war is not lost on some of the men who attended government-run boarding schools where they were forbidden to speak Navajo. "I had to chew yellow soap every time I got caught talking my own language," says Willetto, who trained as a Code Talker but never used it in battle. "And then they used our language to come up with a code." He says he isn't angry, though. He wants Americans to know the Navajo did their part and says a museum will show that.

"We want to leave something behind," Willetto says. "The young people need to know what happened."