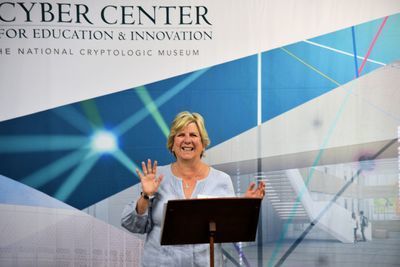 The 24th National Cryptologic Foundation (NCF) General Membership Meeting & Annual Cryptologic Symposium was held on 10 May 2022 and was sponsored by the University of Maryland Global Campus (UMGC). The Foundation is very grateful to UMGC for their continued support of the Foundation's mission and programs. We also wish to thank all who attended the event either in person or via Zoom. We were pleased to have you with us!

Ms. Laura Nelson paid tribute to members of the NCF community who passed away since the last NCF GMM. See photos and details below. Visit the Commemorate section of the NCF website to view the Recently Departed page, as well as the In Memoriam Registry. 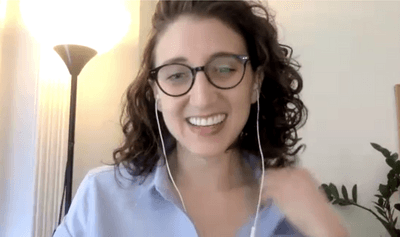 NCF Education Program Manager Jessica Peker provided a thorough review of the Education Program's progress and plans, to include future podcasts and in-house #CyberChats for students and teachers. See video presentation below.

CEO Laura Nelson presented the first Excellence in Support of the NCF Education Program awards. Northrop Grumman received the 2022 Corporate Award and Dr. Gregory Von Lehmen received the 2022 Individual Award. See below for remarks about the awardees and photos from the presentation. See video presentation below. 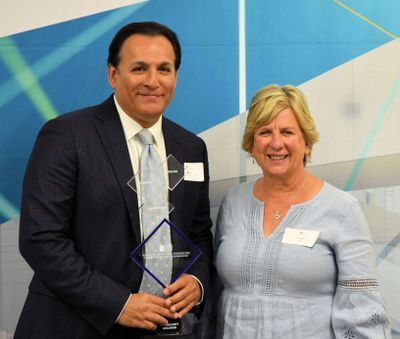 Mr. Neil Dhillon accepted the inaugural Excellence in Support of the NCF Education Program corporate award on behalf of Northrop Grumman. NCF CEO Laura Nelson presented him with the award.

Northrop Grumman has believed in our efforts since 2017. As the NCF presented its dream for an education program founded on a partnership with the University of Maryland Global Campus and NSA’s College of Cyber, Northrop Grumman saw the potential for excellence.

Rooted in their support was the early idea of creating a cyber curriculum and a virtual Cyber Center for Education and Innovation. Sustained funding is key to allowing ideas to blossom into reality. Northrop Grumman's commitment to a nine-year $100,000 annual donation became the cornerstone of our program.

Today, we have community-recognized Cybersecurity Curriculum Guidelines used by many like Teach Cyber, University of AL Huntsville, Army Junior ROTC program, and others to create in-classroom cybersecurity curriculum materials. Through our virtual #CyberChats we’ve reached into hundreds of classrooms across the United States, sharing cybersecurity principles and piquing the interest of thousands of students to consider cybersecurity professions.

Our success today is only possible due to Northrop Grumman's generosity and sustained support. It gives us great pleasure to present the inaugural Excellence in Support of the NCF Education Program – Corporate Award - to Northrop Grumman. 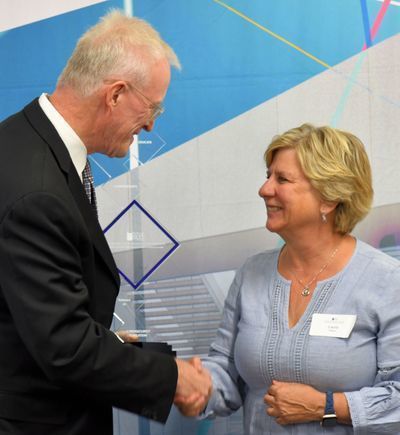 To help guide the NCF’s early ideas on education, an advisory board between UMGC and the NCF was established in 2014 called the Cyber Education Program Advisory Board (CEPAB). In short, it was formed so the UMGC (then called University of Maryland University College) and the NCF could work together to create a proposed education program. The UMGC committed $250,000 in support. Dr. Greg Von Lehmen was central to the running of that organization. Early efforts included two joint symposiums, Cyber at the Crossroads, and Eligible Receiver 97, and presentations during Cyber Maryland conferences.

Greg was instrumental in NCF discussions throughout 2017 as we crafted our vision for the NCF’s Education Program. His astute guidance and partnership led to the proposal accepted by Northrop Grumman and the start of the NCF’s efforts to date. The CEPAB became a fertile ground to craft, discuss, and put into action key program initiatives. Greg's help in creating the NCF’s message and participation in an early meeting with the National Initiative for Cybersecurity Education (NICE) legitimized the NCF’s stature within that community that continues today.

Greg has been the dominant player in helping us establish our Education Program. His advice and counsel were instrumental to the work we did with the CEPAB, two symposiums, NCF operational program agreements with NSA, working with Maryland State committees, and many more behind-the-scenes activities.

It gives us great pleasure to present the inaugural Excellence in Support of the NCF Education Program – Individual Award to Dr. Greg Von Lehman.

Ms. Laura Nelson presented several former NCF staffers and volunteers with gifts of appreciation for their many years of dedication and support. See below for photos, as well as remarks made by Laura and by the honorees. Unfortunately, due to sound issues, video of this portion of the presentation is not available at this time.

2022 GMM honors for staff and volunteers 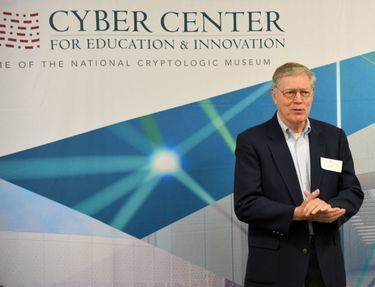 Mr. Harry Wetherbee, author and former Central Intelligence Agency, Directorate of Operations and Senior Operations Officer gave an engaging presentation based upon his book (under pen name of Donald Alexander) The Character of a Leader - A Handbook for the Young Leader. Click to learn more about Mr. Wetherbee and his book.

Ms. Betsy Rohaly Smoot presented a fascinating talk based upon her recently published book, Parker Hitt: The Father of American Military Cryptology. Ms. Smoot is a retired intelligence historian from the Center for Cryptologic History of the National Security Agency. Click to learn more about Ms. Smoot and her book. See video of Betsy's presentation below.

To close out the 2022 NCF GMM, Ms. Laura Nelson provided an update about the NCF's progress and activities. She also shared the latest information regarding the project to build the Cyber Center for Education & Innovation and new Home of the NCM. Finally, Laura answered several questions from attendees. See video of Laura's update, as well as Q&A below.

Part of the NCF's mission is to Commemorate those who have made contributions to the field of cryptology.