Codebreakers - The Invisible Cryptologists. An Interview with James Pryde. 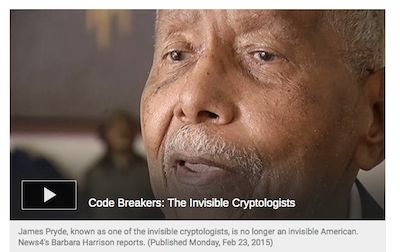 In celebration of Black History Month 2015, enjoy this three part series by NBC Washington, News4's Barbara Harrison, and follow the life of James Pryde, a Tuskegee Airman who became one of the "invisible cryptologists." Also interviewed for the series is David Hatch, NSA Historian.

View the article & videos on the NBC Washington Web site.

Mr. Pryde was inducted into the NSA/CSS Cryptologic Hall of Honor in 2006. Learn about his career and accomplishments via his Hall of Honor page. Mr. Pryde was also a former NCMF board member and continual supporter the efforts of the NCMF/NCM.

Sadly, James Pryde passed away in August 2017 and is deeply missed by his friends at the Foundation. View his In Memoriam page. Donations to the NCMF made in Mr. Pryde's name will help to assure his placement in the In Memoriam Registry at the Museum and online.

You may also be interested in reading the NSA publication The Invisible Cryptologists - African Americans WWII to 1956 by Jeannette Williams and Yolande Dickerson. Visit the Cryptologic Heritage - Publications section of the NSA website and use the online contact form to request this publication.

Check out our previous quarterly cryptologic programs. Some recaps include video recordings.