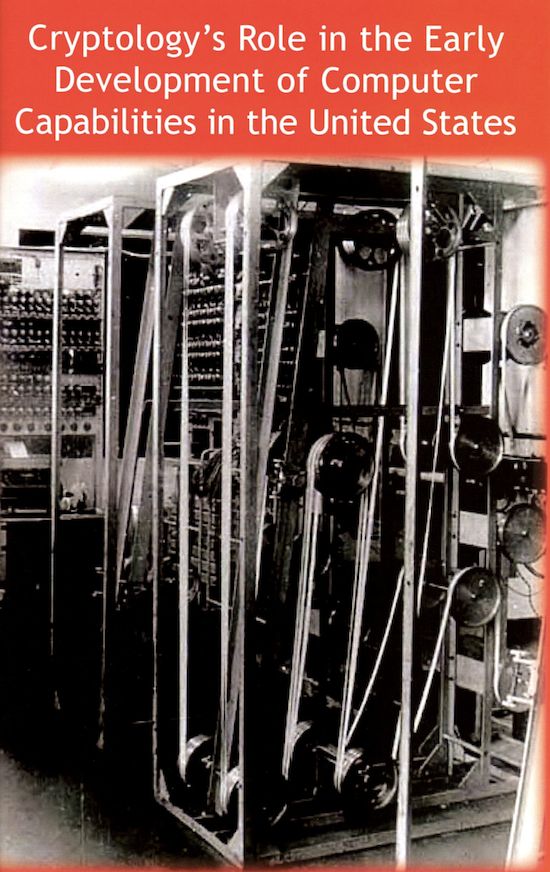 A new brochure, "Cryptology's Role in the Early Development of Computer Capabilities in the United States," is available now at the National Cryptologic Museum. The publication, written by James V. Boone and James J. Hearn, is also available as a downloadable PDF via the NSA website. Below is a short summary of the publication's contents.

"Cryptology is an extraordinary national endeavor where only first place counts! This attitude was prevalent among the participants in the U.K’s Government Code and Cypher School (GC&CS) activities at Bletchley Park,1 during WWII. One of GC&CS’s many achievements during this time was the development and extensive use of the world’s first large-scale electronic digital computer, called COLOSSUS. The highly skilled military personnel assigned to Bletchley Park returned to the U.S. with this experience and, augmented by the experience from other government-supported development activities in the U.S., their ideas for using electronic digital computer technology were quickly accepted by the U.S. cryptologic community, the U.S. Navy cryptologic organization in particular. Many of the talented people in that organization promoted the rapid expansion of this nation’s computer capability as a high-priority task. Some established a new company, others moved on to government organizations and then, through a series of dynamic and interacting events, the cryptologic-based influence of this group quickly spread into the general marketplace. This over forty-year-long set of events is summarized in this paper."