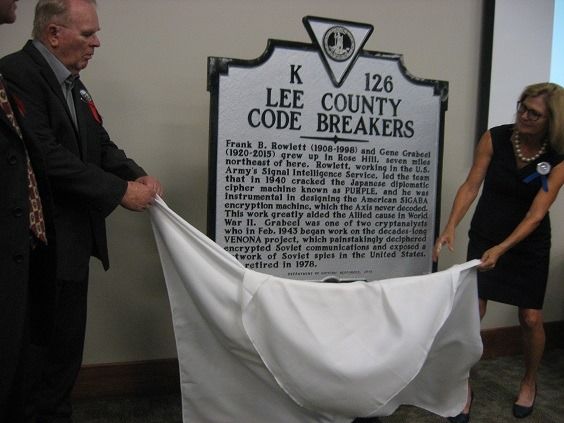 Cryptologic greats Frank B. Rowlett and Gene Grabeel were honored in 2019 at the unveiling of a highway marker to be placed in their native Lee County, Virginia.

Rowlett's son, Thomas, and Daphne Horton, a member of Grabeel's family, unveiled the marker at the ceremony attended by family and friends.

Rowlett was especially known for his work on breaking the Japanese diplomatic code, Purple, and designing the perfect encryption machine, Sigaba, during World War II.

Grabeel was known for her painstaking cryptologic work that began in February 1943 with organizing, characterizing, and analyzing thousands of encryptic Soviet diplomatic messages that led to uncovering the Soviet spy ring in the United States that became known as VENONA.

The excerpt below is from the Virginia Department of Historical Resources.

“Lee County Code Breakers” recalls Frank B. Rowlett and Gene Grabeel who grew up in Rose Hill. Rowlett led a U.S. Army Signal Intelligence Service team that in 1940 cracked the Japanese diplomatic cipher machine known as PURPLE. He was also instrumental in designing an American encryption machine that the Axis never decoded during World War II. Gene Gabreel was one of two cryptanalysts whose decades of work, begun in 1943, “painstakingly deciphered encrypted Soviet communications and exposed a network of Soviet spies in the United States,” in the forthcoming marker’s words.