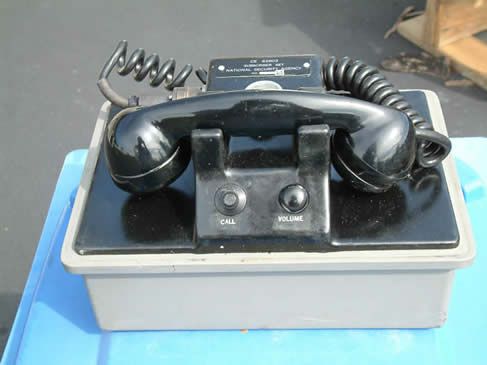 We are looking for information from any of our Web site visitors who may know who, how, when, and where this device was used by cryptographers, radio operators, or other NSA/DoD personnel. The DoD transfer form attached to the unit describes it as a "National Security Telephone."

The artifact pictured is believed to be a 1950s era predecessor to today's modern secure phone system. It carries an NSA label of CE 62603 Subscriber Set No 1094, which designates it as "Communications Equipment" (CE) vice "cryptographic equipment" (KL). This subscriber set uses vacuum tube technology and may have been connected to a stand alone voice encryption device such as an early KY-3 or KG-13/HY-2 secure voice system. In tandem, it likely provided secure encryption for voice communications between facilities. The "CE" nomenclature was a designator often used by Bell Telephone and the DoD/US Army for their systems, which may point to the origin of this subscriber set. This particular set, in private hands, was shipped from an Army MARS Radio Station in Fredericksburg, Texas to Kelly AFB in San Antonio. It may have been released from DoD inventory in 1974. We have a similar set in our Museum inventory with no other clarifying information.

The unit itself appears to be heavy gauge cast aluminum. The top has a carry handle/latch that when elevated & rotated loosens and removes the bolt that secures the top to the base. The interior is a heavy black plastic base with a center raised console. There is a a small speaker above the handset cradle. The handset is heavy black plastic with a conventional coiled cord that is connected to the left side of the console with a heavy duty mil-type Cannon/Amphenol-type connector. On the right side of the console is a phone jack. On the front of the console is a push-button labeled CALL and to its right is a black knob labeled VOLUME. The only possible external connection (perhaps to a stand alone encryption device) is a hole in the center of the bottom of the phone base.