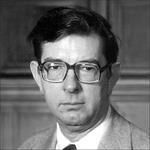 Robert Kessler Painter, of Silver Spring, MD, beloved husband, father, and grandfather, passed away on October 26, 2019 at the age of 89. He was a cryptologist at the National Security Agency until retirement in 1986.

Born in Elgin, Ill., he grew up in Gary, IN, and Gibson City, Ill. He worked his way through college, earning a B.S. with highest honors at the University of Illinois, and later earned a J.D. at George Washington Law. Commissioned as a second lieutenant in 1953, he was assigned to the newly formed National Security Agency. Continuing a distinguished career there as a civilian, he was twice a field chief in East Asia, the first Senior Operations Officer in the National Security Operations Center, and a charter member of the Senior Cryptologic Executive Service.

His survivors are his wife of 64 years, Margaret Painter; children Eric (Lori), Mark (Deborah), and Lora Hartman (Scott); as well as six grandchildren.

A celebration of his life was held at the Slack Funeral Home, Ellicott City, MD, on November 2, 2019. Those who desire may contribute to a charity of their choosing.