The Benefactor and Patron Panel lists the names of individuals or corporations that have made major contributions in support of the Foundation -- at least $10,000 for recognition as a Benefactor, and between $5,000 and $10,000 for recognition as a Patron. The Panel is part of the Museum Entrance Display - see more about this dynamic welcome to the museum after the listing of benefactors and patrons.

Please visit the Founders' Group page to see a current list of individuals and companies who have donated at the Founder's level in support of the new Cyber Center for Education and Innovation - Home of the National Cryptologic Museum (CCEI/NCM). 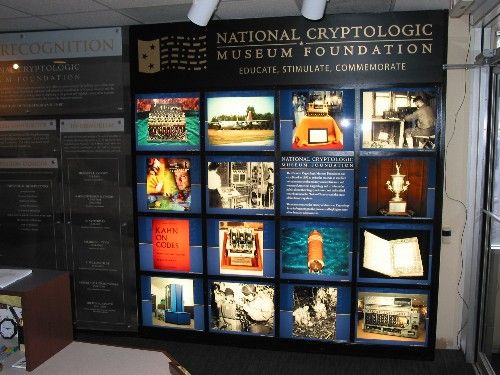 In mid-2007 the NSA and the Foundation launched a joint project to renovate the lobby area of the museum. The goal was to “open up” the entry way and provide a more dynamic welcome for visitors. As part of that project the wall devoted to recognizing the Foundation and its work had to be relocated. The Foundation took the opportunity to improve its image as well as enhance the museum by launching an effort to create a new wall. Prime space was provided immediately adjacent to the main entry. 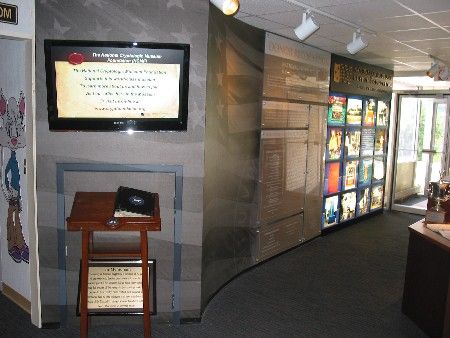 In early 2008 NSA completed construction of the new lobby. The Foundation then hired ADG Creative, Inc. of Columbia to design the wall, which included a flat-panel high-definition display, a back-lit duratrans section with 16 colorful images of artifacts and displays from throughout the museum, and a section recognizing the Foundation’s generous donors. Severn Graphics, Inc. of Glen Bernie, MD was then hired to design, fabricate, and install each section of the wall and the highly decorative background wall covering. The finished product, shown in the accompanying photos, provides an attractive, high-tech welcome for visitors to the museum. It is sure to leave them with a wonderful and everlasting first impression of our Foundation and their visit to this one-of-a-kind museum.