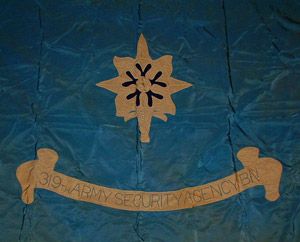 Former ASA’er Bob Clay donated the battalion flag of the USA Security Agency unit at Rothwestern, Germany. The US Army-Air Force took over the base at Rothwestern in 1945, and it remained a U.S. run installation until it was returned to the German Bundeswehr in 1975. During the Cold War the 319th USASA Battalion was responsible for an area that stretched from the Baltic Sea to Southern Germany and from near the Dutch border to the East-West German border. The 319th Battalion had Company level units at various locations throughout Germany. The ASA unit at Rothwestern was a main intercept and MARBURG- equipped special identification techniques (SIT) site during the Cold War. It was also a mainstay of the European direction finding (DF) network. A picture of the 319th  battalion flag is included here.