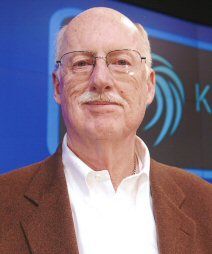 Len Moodispaw, member of the Board of Directors of the NCMF and legal counsel to the Foundation passed away on June 15, 2015 at the age of 72. He was the Founder and former Chairman and CEO of the KEYW Holding Corporation.

Following is the press release from KEYW announcing the passing of Founder and Former Chairman and CEO, Len Moodispaw:

HANOVER, Md., June 15, 2015 (GLOBE NEWSWIRE) -- The KEYW Holding Corporation (Nasdaq:KEYW) announced with great sadness today that Founder and former Chairman and CEO Leonard E. Moodispaw passed away this at the age of 72.

“Words cannot express how much Len will be missed by our KEYW family, the intelligence community, the many others Len has worked with over the years,” commented Caroline Pisano, Chairman of KEYW.  “We express our sincerest sympathies to his family and know that Len's legacy and spirit will continue in KEYW. Len's deep humanity touched and helped many.”

“It is often said that you can count the number of people who have a significant impact on your life on one hand,” commented Mark Willard, interim CEO of KEYW. “By ‘significant impact,’ I mean someone who changes you as a person.  Len made a significant impact not only on my life, but upon thousands of other lives as well.  He was compassionate, caring, generous, and loyal.  He will be sorely missed.”

Len Moodispaw served as the Chief Executive Officer, President & Chairman of the Board of Directors of KEYW from its founding on August 4, 2008 to May 26, 2015 and is the founder of KEYW. Prior to the founding of KEYW, Mr. Moodispaw was President and Chief Executive Officer for Essex Corporation, from 2000 until January 2007, and Chairman of the board of directors of Essex from 2005 to January 2007. In 2007, Essex was acquired by Northrop Grumman, where Mr. Moodispaw served as a Vice President, responsible for managing Essex as a subsidiary within Northrop Grumman Mission Systems from January 2007 to July 2008.

Mr. Moodispaw also served as Chief Operating Officer of Essex Corporation from 1998 to 2000. Prior to that time, he was President of ManTech Advanced Systems International, Inc., a subsidiary of ManTech International Corporation. Prior to his time with ManTech Advanced Systems International, Inc., Mr. Moodispaw served in several positions of the former Essex subsidiary, System Engineering and Development Corporation, including president and general counsel.  From 1965 to 1978, Mr. Moodispaw was a senior manager in the National Security Agency (NSA) and later engaged in the private practice of law. Mr. Moodispaw is the founder of the Security Affairs Support Association (now known as INSA) that brings government and industry together to solve problems of mutual interest.

We hope you will join us in paying tribute to Len's dedicated service by making a contribution in his honor.