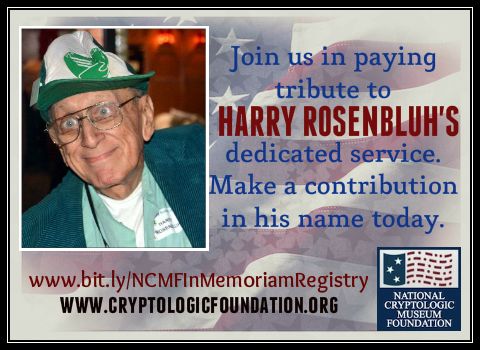 Long-time Laurel resident Harry G. Rosenbluh passed away on Monday, November 16, 2015. A funeral service was held on Tuesday, November 17, at the Danzansky-Goldberg Memorial Chapels in Rockville, Maryland, followed by interment at King David Memorial Gardens in Falls Church, Virginia. He is survived by his son, Rabbi Joseph M. Rosenbluh of New York City.

Harry was born December 12, 1927 in Atlantic City, New Jersey, and grew up there. He attended the University of Pennsylvania from 1945-1946, joined the U.S. Army, with which he served in Japan, and then returned to graduate from University of Pennsylvania in February 1951. He entered on duty with the Armed Forces Security Agency June 11, 1951 and continued working with its successor, the National Security Agency, until his retirement in 1984. He spent many years in the Production organization where he was able to utilize his extensive foreign language skills.

A long-time resident at Steward Manor apartments in Laurel, Harry was deeply involved in many activities that enriched the Laurel community. Harry was one of the founding members of the congregation that became Oseh Shalom, and he served as the lay leader at the small Fort Meade synagogue for over 16 years, conducting Jewish services and providing formal training classes to military personnel. Especially noteworthy was the support he provided to families following a terrible traffic accident that claimed the lives of a large number of children of Fort Meade personnel. His efforts on their behalf received special commendation from both the post commander and the director of NSA.

For many years Harry provided ESL tutoring services at a church in Laurel, and he served as a member of the Laurel Senior Friendship Society, which provides transportation and other services to seniors. He was also active in the Laurel Historical Society, and was an integral part of the committee that planned the Laurel Centennial celebration.

Less well known, but an exceptionally important part of Harry's life for 35 years, was his editorship of the "Phoenician," a quarterly publication for retired NSA personnel.

Harry travelled extensively after he retired, circling the world 3 times, seeing all the continents, including Antarctica, and visiting approximately 160 countries. Wherever he traveled, he made a point of visiting synagogues and meeting the local rabbis or congregants. He also made a point of buying hats wherever he travelled, accumulating a collection of several hundred.