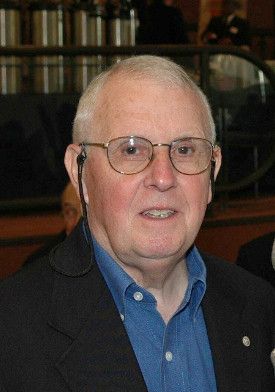 David H. Hamer..... With heavy hearts, David H. Hamer's wife, Joan, his daughter, son-in-law, and three granddaughters announced his death at age 82 on Monday, April 3, 2017. He passed peacefully at home, without pain, surrounded by his family. His mind remained sharp and he continued to recite limericks until the end. (See remarks from friends and colleagues below.)

David was born in 1934 in Billingham, an area that would later be heavily bombed in WWII. Naughty young boy that he was, during the war he used to take tiny fragments of bombs that had exploded and put them on the railroad tracks, so that when the trains drove over them, it went "bang." He served in the British Royal Air Force in an intelligence role, before his career as a physical chemist brought him to the United States in 1964. After retiring from his career in chemistry, David became a pilot, which resulted in several long-term assignments in Berlin, Paris, and London. His travels also took him to India, Nigeria, North Africa, the Middle East, and most of the countries of Western Europe.

With a penchant for words and numbers, his love of crossword puzzles, indirectly, led him to cryptology in about 1986. He had been looking for a computer program that could help solve crossword puzzles and was referred to the American Cryptogram Association. He never did find the computer program he sought but learned about programs that cracked codes and ciphers. As he did with most things he found interesting, he dove into cryptology with both feet and began writing and lecturing about its history demonstrating the use of Enigma machines to anyone who had an interest, from library groups to experts at conferences to his grandchildren - who learned how to correctly insert wheels and push buttons.

He became an internationally recognized expert in cryptology. In 2000, he was appointed visiting research scholar by the Bletchley Park Trust in England. He was a member of Executive Committee of the National Cryptologic Museum Foundation, in Fort Meade, MD, where he also served as the liaison officer with Bletchley Park and as Vice-Chairman of the Acquisitions Committee. He published several technical papers, and wrote book reviews and articles for Eye Spy, U.S. Naval Cryptologic Veterans Association (NCVA), Cryptologia (Editorial Board), Cryptogram, Chronological - Historical Association, South West Wales. His website will remain at: http://www.intelligenia.org/

As word of his death is now spreading, more and more people are sending in messages, reminding us of how much his contributions to the field are appreciated. His family is, of course, missing a missing a husband, a dad, and a grandpa. Per his wishes, there will be no funeral or service. His ashes will be scattered in England. In the coming months, there will be a luncheon to celebrate his life. He would love nothing more than for all of us to raise a glass in his name - preferably a glass filled with a good Irish whiskey.

Details to follow. We do hope you will be able to join us.

When I first started attending the symposiums, and didn't really know anyone, David was one of the first people to really reach out to me and to make me feel welcome. He helped by pointing people out and helping me match names, and faces, and deeds. He was a big part of assisting me to feel a part of the symposium's community. He will be sorely missed.
~ Ms. Elonka Dunin

I was so sorry to hear the news about David. He was really a brilliant intellectual and the size of his intellect belied the size of his small physical stature. I first met him when I took over as Acquisitions chair in 2002. He was already on-board as our UK rep and co-chair. I was instantly impressed by his grasp and depth of knowledge about both of our nation's  cryptologic histories. It's one thing to read about Great Britain's cryptologic giants from WW II. Our David was a contemporary and friend of many of the codebreakers from that era who helped win the war. There weren't many people left on either side of the ocean who could make that claim.

As my namesake (i.e., both Daves), the first few times we met I would greet him with a "hi Dave," and he always quickly corrected me by saying "the name is David!"  After a while I realized how serious he was about using all the letters in his name to greet him. Oh such proper British etiquette!

We frequently collaborated on both the acquisition of and write-ups for new items for the museum. He helped build, expand, and strengthen the important historic bridge between our respective museums and our nations. David (or Dave... one last time!) was an absolute pleasure to work with and I am proud to have known him and call him both colleague and friend.
~ Mr. David D'Auria