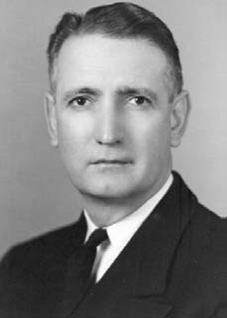 Jefferson Dennis was born in Colorado in 1909 and graduated from the Naval Academy in 1930. He then served at sea in the usual assignments for junior officers. After completing submarine training in 1936 he served for two years aboard S-21.

In 1937 he was assigned to the Communications Division, Office of CNO. In 1939 he was assigned to the Philippines and became Assistant Fleet Communications Officer on the staff of the Commander in Chief, U.S. Asiatic Fleet. While stopping briefly at Station C on Corregidor while en route to Washington, D.C. in the summer of 1940, Dennis taught others how to use traffic analysis, or "TA," to derive strategic intelligence from Japanese radio communications without actually reading their encoded messages. In 1941 he was assigned to fitting out of USS Aaron Ward and was Executive officer upon her commissioning in March, 1942.

In May, 1942 he was again assigned to the Division of Naval Communication, Navy Department, until 1944, when he joined the Fleet Radio Unit Pacific at Pearl Harbor. He returned to Nebraska Avenue in 1945, and continued there until formation of the Armed Forces Security Agency in 1949 in which he served, then he served with the National Security Agency. In 1953 he became Assistant Chief of Staff for Intelligence for the Commander in Chief Naval Forces, Eastern Atlantic and Mediterranean. We was head of the Naval Security Group from July 1955 to November 1957.

In 1957 he reported as Assistant Director of the National Security Agency and served in that position until his death in 1958. He died of a heart attack while shoveling snow from the driveway of his quarters at Fort Meade, MD. He was posthumously awarded the Distinguished Service Medal and promoted to Rear Admiral.

RETURN TO THE IN MEMORIAM PANEL PAGE