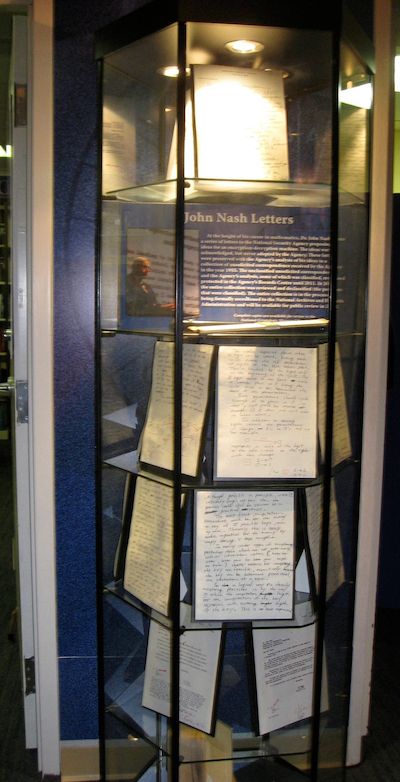 The National Cryptologic Museum's exhibit, "An Inquisitive Mind: John Nash Letters," features copies of correspondence between Dr. Nash and the National Security Agency (NSA) from the 1950s when he was developing his ideas on an encryption-decryption machine.

In the movie A Beautiful Mind, actor Russell Crowe portrays the mathematical genius whose game-theory research as a graduate student at Princeton University earned him the Nobel Memorial Prize in Economic Sciences in 1994.

At the height of his career in mathematics, Dr. Nash wrote a series of letters to NSA, proposing ideas for such a machine. While the agency acknowledged his ideas, they were never adopted. The letters were preserved with NSA's analysis in a collection of unsolicited correspondence received in 1955.

The unclassified letters and the agency's analysis, portions of which were classified, remained protected in NSA's records center until 2011, when the entire collection was reviewed and declassified. The entire collection is being formally accessioned to the National Archives and Records Administration and will be available for public viewing later this year.

Copies of Nash's letters to NSA are on display at the National Cryptologic Museum with complete copies available for review in the museum's library and ONLINE. The Nash letters were also recently featured on the National Geographic Channel's (NGC), "Inside the NSA" program. For more information on the program, please visit the NGC web site.

In March 2015, John Nash was awarded the 2015 Abel Prize for his work in mathematics. He shared this prize with longtime colleague Louis Nirenberg. Nash is the first person to receive both the Nobel and Abel Prizes.