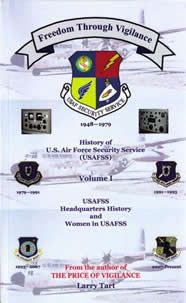 Mr. Larry Tart, the author of Freedom Through Vigilance: A History of the U.S. Air Force Security Service donated the first three volumes of his work to the Foundation for the NCM Library. Larry served in the U.S. Air Force Security Service for twenty-one years, retiring in 1977 as a senior master sergeant. He played a major role in creating the NCM’s C-130 Aerial Reconnaissance Memorial dedicated at Fort Meade on Sept 2, 1997. His "FTV" work is divided into four volumes. I, II and III chronicle the U.S. Air Force Security Service SIGINT ground-site histories during the Cold War, and females in the USAFSS. When published, volume IV will address USAFSS airborne SIGINT reconnaissance operations. The comprehensive history also includes limited coverage of ESC, AFIC, AIA and AFISRA. A cover picture of the book is included here.