Washington, DC and Tysons Corner, VA
Add To My Calendar 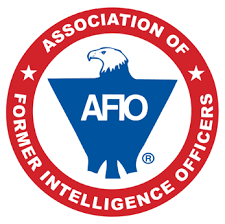 Seats are filling up fast for the AFIO 2019 Symposium: The Role of Intelligence in a Free Society- Cyberwar, Leaks, FISA, Domestic and Foreign Use and Misuse of Intelligence, Concocting Reasons to Spy on Political Rivals, plus the all-new International Spy Museum., L'Enfant Plaza location.

Remarks will be provided by Museum Representatives COL Christopher Costa USA (Ret.), Executive Director of the museum; and Dr. Vince Houghton, the museum's Curator and Historian.

Breakfast and lunch will be provided at the museum.
Return trip back to hotel will be at 3 p.m.

Friday, 10 May is Day Two and will be held at the DoubleTree Hilton Hotel, Tysons Corner, and features a full day of speakers and panels.

The morning panel, moderated by ROBERT S. LITT, former General Counsel of the Office of the Director of National Intelligence, will cover "Intelligence and Democracy: Time to Rethink FISA and Intelligence Oversight." It features panelists GLENN GERSTELL, General Counsel, NSA; JOHN RIZZO, former Chief Legal Officer, CIA; and SUZANNE SPAULDING, Under Secretary for the National Protection and Programs Directorate, DHS in what should be a spirited exchange of views.

EVENING: The day will close with an evening cocktail reception and the "Spies in Black Ties" five-course Champagne Banquet featuring a special keynote address by TBA.

Buses will transport attendees from the DoubleTree Hilton, Tysons, to the International Spy Museum and back. The second day of event takes place at the DoubleTree Hilton, Tysons, 1960 Chain Bridge Rd, McLean, VA 22102. To be ready for early departure by buses on Day One, it is recommended that attendees consider staying overnight starting Wednesday, 8 May. Overnight sleeping room reservations may be made online at this link or by calling (703) 893-2100. The special room rate is $139/night but ACT NOW for it ends shortly. You must reference the group code AAF. You may also locate rooms at this or other nearby Tysons/Vienna hotels using online services, e.g., Trivago, Expedia, Travelocity, or Orbitz.

Register online now to attend the symposium by using the link provided below to the AFIO registration page.
You can also view the tentative program for both days via the second link below.