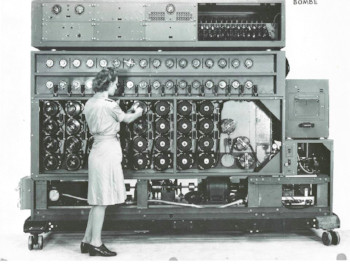 Cryptology, the study of code making and code breaking, has been around since man could scrape images on cave walls. (Well, maybe not the study, but certainly the practice.) Through thousands of years, cryptologic secrets were trusted to only a few, which were almost always men. Much of that changed after the First World War, however, and became a necessity during World War II.

While many women entered the field of cryptology during World War I, some of the best known women cryptologists entered the profession post-war and were followed by thousands more during WWII. These women made history by serving our nation behind the veil of secrecy in the United States Army’s Women’s Army Auxiliary Corps (WAAC) and in the United States Navy as Women Accepted for Volunteer Emergency Service (WAVES). President Franklin D. Roosevelt signed the bill establishing the WAAC in May 1942 and another bill later that year creating the WAVES.

Thousands of women served as cryptologists or in positions supporting cryptologic operations in the Army and Navy during WWII, either as civilians or in uniform. Women across the United States were eager to do their part for their country.

Only women meeting higher qualifications were admitted into cryptologic work. Women in the Army were required to meet officer qualifications and possess strong mathematics or language skills. With the Army and Navy competing for women with similar qualifications, the Navy offered officer status for cryptographers.

Women accepted into the cryptologic field were sworn to secrecy. They took their oath and were told the penalty for discussing their work outside approved channels could be death, since it was considered treason during a time of war. The Army and Navy placed a higher value on integrity than skills brought to the job, believing that women who met the qualifications but were untrained in cryptography could learn the skills they needed. Women who loyalty was in question, however, were disqualified from what would be highly classified work.

Women accepted to serve in the Army and Navy underwent extensive training. Those selected to support cryptologic operations in the WAAC program went to Arlington Hall Station in Virginia, where they learned about cryptology and code, from theory to practice.

Signal and cryptologic operations at Arlington Hall and the Naval Communications Annex were top secret. Neither the Army nor the Navy told the women how their work fit into the whole. Cryptanalysts knew how their achievements aided the men overseas, but the WACs (women serving in the WAAC) intercepting coded messages in the Army’s 2nd Signal Service Battalion and the WAVES operating the cryptanalytic machines rarely learned the results of their efforts.

A major part of the WAVES’ job was building and operating the Navy Cryptanalytic Bombe, a 2.5 - ton electromechanical device developed to break the four-rotor enigma messages from German U-boats. Six hundred WAVES worked three eight-hour shifts, seven days a week at the National Cash Register Company (NCR) in Dayton, Ohio, where they learned how to solder and connect wires, read electrical diagrams, assemble rotors, and build 121 of these machines with no idea what they were building or why. It was tiresome, tedious work that allowed no room for error. After the first successful Bombe run in May 1943, the WAVES traveled with their Bombes by rail back to the Navy Annex in Washington, DC, where they operated the machines through the end of the war.

Life was physically, emotionally, and mentally challenging for the Army WACs and Navy WAVES. Many lived in barracks with 84 women to a floor until improvements were made. These conditions allowed for very little privacy or sleep. Also, there was the daily stress resulting from the unforgiving environment that left no room for mistakes.

Despite the challenges that came with the job, women in cryptology performed their work assiduously and were proud to serve in the military. WAVE Lt. Sylvia Rosenwasse recalled, “They were very devoted and very caring and [had] a wonderful esprit de corps. They were proud of their uniforms and proud of being in the Navy.”

The same, of course, could be said of the WACs. A WAC commander reported, “When demobilization came, my women swore they would never come back to the War Department or to shift work, but about 25 percent eventually did–as civilians.”