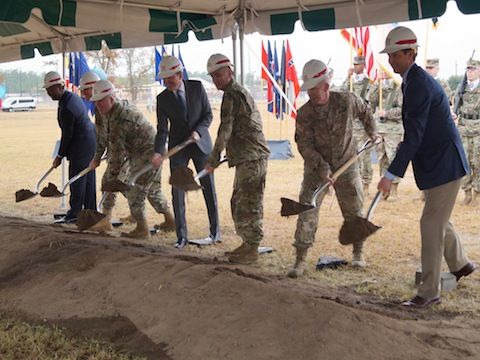 From the ArmyTimes.com. Click Here to view article online and see additional photos.

The groundbreaking for Army Cyber Command’s new complex at Fort Gordon, Georgia, represents a crucial turning point for the nation’s ability to fight in the cyber domain and diminish gaps in capability, Army leaders said Tuesday at the event.

“We are demonstrating to our adversaries that no matter how warfare may change, we intend to fight, win and dominate,” said Army Secretary Eric Fanning at the groundbreaking ceremony. “Cyberspace can be considered the ultimate high ground. … We intend to degrade, disrupt, destroy and manipulate any enemy.”

The investment in the new cyber complex “is a turning point in the nation’s and the Army’s ability to project power in cyberspace,” said Lt. Gen. Paul Nakasone, who took command of Army Cyber Command and Second Army in October. “It sends a powerful message: The United States Army is ready, willing and able to defend our nation and our national interests, defeat our adversaries on land and in cyberspace and protect freedoms we enjoy today, tomorrow and in the future.”

The new 300,000-square-foot facility, estimated to cost $180 million, will be a single hub for Army cyber organizations, which are now spread among nine locations across the service, Fanning said. As a result, more than half of the Army’s cyber mission team will be located at Fort Gordon, he said.

“The need for this facility is clear,” Fanning said at the ceremony. “We will embark on an ambitious modernization effort to narrow technological gaps. … The Army’s overmatch against potential adversaries is not what it once was in several critical areas. It’s not what it needs to be. For cyber, a domain that will only grow in importance, the need to invest in and modernize our operations is imperative.”

The next headquarters of Army Cyber Command, expected to be occupied by 2020, will provide “the weapons system that will ensure our cyber warriors go into battle with the tools they need, so all of our soldiers can operate in a more secure environment,” Fanning said.

The center represents “an investment in the Army’s future readiness that will ensure cyber teams, in both offense and defense, can train, plan and operate in a state-of-the-art facility,” Nakasone said, “equipped with cutting-edge technology, enabling them to provide superior support to joint and Army warfighters.”

Locating cyber organizations together will enable the Army to quickly adapt and train its cyber soldiers and civilians.

“The integration between the operational force and the institutional capabilities that support it is absolutely critical in the dynamic and ever-changing domain of cyber,” said Maj. Gen. John Morrison Jr., commander of the Army Cyber Center of Excellence and Fort Gordon. It will “enable continuous integration of operational lessons learned and training in doctrine. This will provide an unparalleled opportunity for soldiers and civilians to learn techniques of adversaries in real time and rapidly turn them into lessons learned.”

Training of cyber warriors is already underway at Fort Gordon, Morrison said. Recently the first class of has graduated from the cyber basic officer leadership course, with 21 new officers for the Army’s cyber branch.
Center for innovation

Between now and the completion of the center, the Army will strive to keep building capability, the leaders said.

“No domain changes as rapidly as cyber,” Nakasone said. “In four short years when we move into the new command complex, our Army networks will be more secure, agile, scalable and resilient than we’ve ever known.”
One key role for the facility is to be “an incubator of innovation, to be a key node of the Army’s modernization and a pillar of joint force cyber operations,” Fanning said.

The facility will allow the opportunity to build bridges between the Army and other innovators so they can address emerging threats together, leaders say.

It will bring together cyber expertise from military, industry, intelligence assets and academia.

The cyber center will defend the interests of the nation as a whole, Fanning said.

“We are demonstrating to the nation that we are committed to protecting commerce, communication and critical infrastructure that allows our nation to thrive,” he said.

Army Cyber Command will train and employ thousands of soldiers and civilians who will use the persistent training environment for experimentation and innovation to maintain an advantage over adversaries, Nakasone said.

Their efforts will be organized to support Army forces across all echelons, he said.

The command intends to support cyber careers for soldiers and civilians with an adaptive talent management plan, rewarding initiative and aptitude, Nakasone said.

The center will need a continuous and significant power supply to keep operations running.

In mid-November, Army officials opened a 27-acre solar power array at Fort Gordon. The project is designed to supply the civilian power grid that Fort Gordon uses, and in the future to provide power directly to the post.

“Eventually this building’s critical power requirements will be met by the 30-megawatt photovoltaic generation project completed early this month,” Fanning said. “This will allow Army Cyber Command to operate independent of the current commercial electric grid.”

The independent energy source will help ensure continuity of operations at the cyber center, Fanning said.

The Army and the nation must be prepared for a wide range of contingencies – and enemies, he said.

Return to our HOME PAGE
View the Cryptologic Bytes Archives via the Return to List link below.