Hacking the Nazis: The secret story of the women who broke Hitler's codes - by Nick Heath 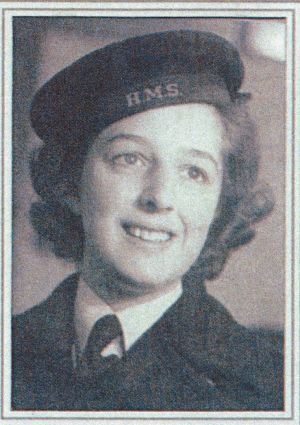 Photo is of Ruth Bourne at 18 years of age, wearing her Wrens uniform

Nick Heath's article, "Hacking the Nazis: The secret story of the women who broke Hitler's codes," for TechRepublic.com is yet another excellent article to feature as we close out Women's History Month.

Below is an excerpt from the article. Visit the link to the TechRepublic site for the full article, plus additional photos and links.

"Because Turing's individual achievements were so momentous, it's sometimes forgotten that more than 10,000 other people worked at the Government Code and Cypher School, of whom more than two-thirds were female. These servicewomen played a pivotal role in an operation that decrypted millions of German messages and which is credited with significantly shortening the war.

The vital importance of preempting German plans led to a huge push to create machines that could crack ciphers at superhuman speeds. These efforts produced Colossus, the world's first programmable electronic digital computer.

However, the reality of running these electromechanical machines, setting rotors and plugging boards day in day out, was often less than thrilling, with the 18-year-old Ruth Bourne envying the girls who test-piloted aircraft fresh off the production line.

"That was exciting but standing in front of a machine for eight hours was not," she said.

As mundane as her daily routine was, it was vital in deciphering coded messages sent by the German army, navy and air force and helping the Allied forces turn the tide of war.

The problem facing Britain and its allies early in the war was that the Enigma machine used to encrypt Nazi military traffic could scramble a message in 158 million ways, and each day the settings used would be changed. On top of that, on an average day at Bletchley Park code-breakers were tasked with breaking between 2,000 and 6,000 messages of German, Italian, Japanese and Chinese origin. There were far too many to check by hand.

The code-breaking needed to be automated, and it fell to British mathematician and father of the computer Alan Turing, with the help of the British Tabulating Machine Company, to devise the machine for the job.

His solution was the bombe, an electromechanical machine designed to emulate the workings of 36 Enigmas.

Bourne was a member of the Women's Royal Naval Service, known as the Wrens, who were charged with preparing the machines each day, turning the drums on the front and plugging up the boards at the back according to settings laid out in a menu. These settings were derived from cribs, which were best guesses at fragments of plain text—for example, standard openings such as weather reports—from the enciphered messages.

If correct, these cribs would reveal some of the Enigma settings used to encode the message and provide a starting point for devising the remaining settings. The bombe could check the possible ways the Enigma could have been set up incredibly rapidly, dismissing incorrect settings one at a time. If the crib and initial settings were good, then the bombe could return the information needed to crack the code within minutes."

View the full article and photos on the TechRepublic.com site.
Return to our HOME PAGE
Visit the Cryptologic Bytes Archives via the "Return to List" link below.