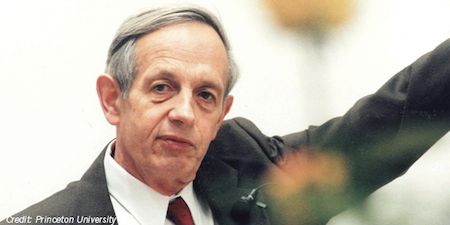 John Nash recently received the 2015 Abel Prize for his revered work in mathematics. Nash is also a 1994 Nobel Prize Laureate in economics (dramatized in the film A Beautiful Mind) and the first to receive both the Abel and Nobel. But for mathematicians it is his seminal work in partial differential equations — which are used to describe the basic laws of scientific phenomena — that stands out as his most astounding and influential accomplishment.

Admirers of his work felt that by receiving the 2015 Abel Prize by the Norwegian Academy of Science and Letters in recognition of that work, Nash's true genius has finally been acknowledged.

In a Princeton.edu news story, Nash is described by former students as the professor who would spend time with students after class, challenging one another with mathematical puzzles. With a playful attitude, Nash treated mathematics as a sport in a way that inspired his students and colleagues. Many years later, he continues to be inspiring and approachable.

When visiting the National Cryptologic Museum, don't forget to check out the AN INQUISITIVE MIND: JOHN NASH LETTERS exhibit featuring copies of correspondence between Dr. Nash and the National Security Agency (NSA) from the 1950s when he was developing his ideas on an encryption-decryption machine. If you aren't able to visit, you can view PDFs of the letters online.