Duchess of Cambridge Learns About Grandmother's Wartime Past 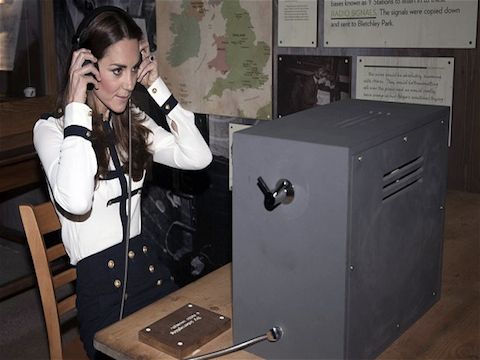 Duchess of Cambridge visits Bletchley Park and discovers that her grandmother, Valerie Glassborow, was witness to an extraordinary moment in history

As a young girl, the Duchess of Cambridge would often ask her paternal grandmother: “Granny, what did you do in the war?”

Only now has she learned that Valerie Glassborow was witness to an extraordinary moment in Second World War history.

Miss Glassborow worked at Bletchley Park, home of Britain’s code-breakers, and was on duty when a message was intercepted saying that Japan had surrendered.

She was one of only a handful of people – along with the King and the Prime Minister – to learn that the war was over, but could not share the news because she was sworn to secrecy.

Miss Glassborow died in 2006, aged 82, having spoken little about her wartime experiences.

Fortunately, one of her former colleagues, Lady Marion Body, remembered her well.

The Duchess met Lady Body during a tour of Bletchley Park, which is reopening after an £8 million restoration project, and heard about the Japan message for the first time.

“She didn’t know about that and said she’d go and tell her father,” said the 90-year-old Lady Body.
“She wanted to know what she did here. I was able to tell her. Valerie would never have spoken about it – I wouldn’t have done until recently.

“Valerie died a few years ago and it was only fairly recently that people felt able to talk about it.”
The Duchess told Lady Body: “When I was a girl I did ask Granny about it,” but indicated that her grandmother had spoken little about her experiences.

Miss Glassborow and her twin sister, Mary, worked as civilians for Y Service at Bletchley, monitoring diplomatic messages and checking that the listening stations were doing their job.

“She shared a rather special moment at Bletchley with me, and Mary was there too,” Lady Body said.

“It was 15 August 1945, I think it was in the afternoon, and we happened to be on that shift. Our superior officer, Commander Williams, came into the room smiling and he said, ‘Well done, girls. A signal has been intercepted from Tokyo to Geneva and it’s the signal that the Japanese are surrendering.

“We just sat there in complete silence. Commander Williams shuffled about and then he said, ‘Well, you bloody well get on with your work now,” which broke the ice. We all laughed.

“He did say a message has gone to the King and the Prime Minister but it cannot be announced until Geneva has sent on the message to London.

“It’s something that I could never tell anybody that happened to me, obviously, because we were sworn to secrecy. But it was a great moment to feel you were perhaps among the first people to hear the war was at last over.”

Asked if they had heard the news before the King, Lady Body replied: “I should think about the same time. It was a great moment.”

Apart from that day, said Lady Body, the work was far from exciting.

“It was tedious. We were monitoring what signals were being picked up,” she recalled. “The radio stations, called Y stations, were listening to call signs they were picking up and we had to check they were doing the right thing.
“The Duchess’s grandmother worked on the same desk as me. I had been at secretarial college with those two girls so I knew them very well.

“They were fun. When you have such a boring job you had to get on well. We knew exactly what we were doing – it was part of the war effort.

The Glassborow twins arrived at Bletchley in early 1944 and remained there until October 1945, as civilian workers based in Hut 16.

Lady Body said: “We were all young girls together, and we weren’t in uniform. We were all about 20 – I think we all had our 21st birthday party on night shift at Bletchley.”

The twins were born and raised in Marseille, where their father, Frederick, was a manager for London County and Westminster Bank.

The family moved back to Britain when the girls were in their teens and settled in Leeds, where she met Peter Middleton. They married in 1946 and had four sons including the Duchess’s father, Michael.

Peter Middleton served as an RAF pilot during the war and later became a pilot instructor for British European Airways, based at Heathrow. In one of the family’s earliest links with the Royal Family, Mr Middleton co-piloted a plane with the Duke of Edinburgh during a tour of South American in 1962. He died in 2010.