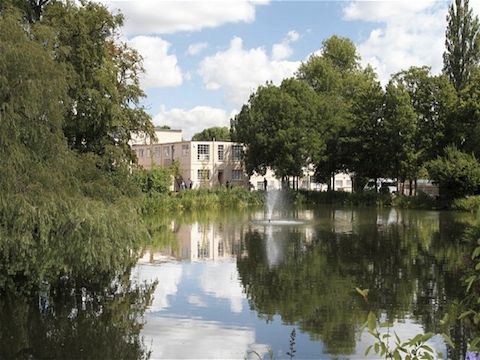 Bletchley Park: The Secret Is Out At Last
After an £8 million restoration, the code-breaking site of Bletchley Park is ready for a flood of visitors – starting with the Duchess of Cambridge

So, they’ve finally cracked it. Bletchley Park, the Second World War code-breaking site in Buckinghamshire, celebrates the completion of its one-year, £8 million Heritage Lottery-funded restoration project today with a visit from the Duchess of Cambridge.

You would never guess – well of course you wouldn’t – as you cross the main road from Bletchley railway station and pass a new housing development, that this small country estate housed thousands of wartime staff and the brains that broke, among many other things, the Enigma codes. Nobody knew about it until the first book about Bletchley came out in the Seventies. Nobody visited until a band of doughty local historians fought its demolition and opened it in 1994 (10 people turned up).

“I think a lot of people who worked here during the war were shocked when the book came out,” one of the Bletchley guides told me. “All new arrivals had to sign the Official Secrets Act and they put the fear of God into them. Lots of them didn’t ever speak about it.”

Luckily for us many did, and their voices have contributed hugely to the displays in the restored Huts 3 and 6 and the new visitor centre in Block C, where the Duchess will arrive. Just entering Block C, with its utilitarian yellow walls, dark green woodwork, bulky radiators and unadorned, echoing concrete floors, catapults you back in time.
Close your eyes for a second and it fills with dozens of young women punching information into noisy Hollerith machines. During the war this area was known, with typically ponderous Bletchley humour, as the “Freebornery,” the information storage section run by the logistical genius Freddie Freeborn and staffed mainly by women.

Now a line of train doors, mimicking arrival at the station, opens on to a film about Bletchley’s wartime past, followed by a display of cipher machines and teleprinters used by intelligence staff on both sides. You can don a headset to hear crackling wireless messages or, if you’ve got that sort of brain, try a bit of deciphering for yourself. Wooden boxes hold handwritten cards of Japanese vocabulary or German military abbreviations, carefully cross-referenced and filed.

The Bletchley tour is self-guided (you pick up an audio guide in the visitor centre) and it covers the four main areas of wartime operation:intelligence gathering, from enemy wireless transmissions picked up by intercept “Y stations” across Britain; code breaking, using human brainpower aided by machines such as Alan Turing’s “Bombe” and later Tommy Flowers’s “Colossus”; analysis and evaluation of decoded messages; and dissemination of information to MI6 or into the field.

By the end of the war Bletchley was, according to the official guide, “a vast and complex global signals intelligence factory”, famous in particular for cracking Enigma (the encryption machines used by the German forces, the settings for which changed every 24 hours at midnight) and, later, a more sophisticated machine called Lorenz, used by Hitler and his high command.

Most of this occurred in the wooden huts, once dilapidated but now restored, repainted and re-roofed, with their surrounding hip-high blast walls rebuilt and shatter tape criss-crossing the windows. Later, work expanded into the drab, bombproof, concrete Blocks A to H.

“It’s the intellectual clout that was gathered here during the war that blows my mind,” said John Oxley, one of the volunteer guides offering optional hour-long tours. These are useful for an overview, although they don’t enter any of the buildings. He explained that Bletchley was chosen partly because of its location on the A5 to London and on the “Varsity Line”, the railway connecting Oxford and Cambridge, where many fine minds were recruited. Workers were billeted in nearby villages, cycling into work for their shifts, and the caretaker drove any outgoing mail off-site, to be posted in various village letterboxes.

Our tour started at “The Mansion”, a Victorian country house bought by a stockbroker in the late 19th century and adorned with domes, turrets and gables. In 1938 it hosted a shooting party that was in fact a secret meeting of Admiralty top brass to arrange the mansion’s purchase for intelligence and code-breaking operations by the Government Code and Cypher School (GC &  CS) under Cdr Alastair Denniston.

John pointed out the stable yard bungalow used by Turing and Gordon Welchman while working on the “Bombe” – a machine that sped up the daily testing of possible encryption settings for Enigma – and the memorial to the three Polish mathematicians who handed vital pre-war Enigma work to Britain and France in 1939.

Once on my own with the audio guide, it was hard to decide what was more atmospheric: the Mansion, with Denniston’s corner office and a library full of Imperial typewriters, “Careless Talk” signs and Bakelite phones; or the deceptively spacious huts (they must have been freezing in winter), with home-made paper decoding cribs and a chute connecting Hut 3 (code breaking) with Hut 6 (analysis), which was banged with a broom when a message was on the way.

Then there was Hut 11, home to the “Bombe” itself, which was operated and maintained around the clock by shifts of Wrens. They cleaned and reset its restlessly turning dials, with their brightly coloured casings and shiny central discs, according to a daily “menu”. It was physically and mentally demanding and at the end of the war they were instructed to destroy every one of the precious machines.

I was exhausted myself by the time I got to Block B, which was turned into a museum during an earlier restoration. It had a display on Turing, including the 2009 apology on behalf of the nation for the appalling treatment he received for his homosexuality in the Fifties, but also outlining the extraordinary breadth of his achievements. Nearby, a volunteer was giving live demonstrations on a rebuilt “Bombe”, a mind-boggling collection of discs and wires.

There were recordings of Wrens and code breakers remembering their time at Bletchley, from the mysterious recruitment procedures (“We did wonder why, as Wrens, we were being sent as far from the sea as you could get in this country”) to the varied leisure activities. It had fascinating stories about double agents and captured spies, some of which seemed to come from the pages of the Boys’ Own Annual, but were crucial in concealing the fact that the Allies had broken Enigma.

It was “Colossus”, the world’s first electronic semi-programmable computer, that finally finished me off. The brilliant GPO engineer Flowers built it to break Lorenz. It was fascinating, and there is even a real, working “Colossus” around the corner in the National Computer Museum, which discounts entry for Bletchley visitors.
But the twirling discs in my brain had come to a grinding halt. It’s a lot to take in. My suggestion is to spend a whole day, starting with the Mansion and huts, breaking for lunch in Hut 4 (formerly Naval Intelligence analysis) or a picnic by the lake (part of the landscaping restoration), then do the blocks and museum in the afternoon and, if you have any energy left, end with the National Computer Museum.

It’s not over yet. Restoration on Hut 8, Turing territory, is still under way. But what stays with me from Bletchley is the human detail: the signals sheets saying “DO NOT WRITE IN THE LEFT MARGIN”, with every left margin filled with scribbles; the fact that Hut 8 contained no fewer than three chess grandmasters; the use of London bankers in the analysis section because they were so good with figures.

It could be the Duchess’s most interesting visit yet.

The site is off the A5 and is a five-minute walk from Bletchley railway station, which has rail connections across the country.

Until the end of 2014, Bletchley Park is part of National Rail’s 2FOR1 scheme. Download a voucher from daysoutguide.co.uk.

A new film about Alan Turing, The Imitation Game, starring Benedict Cumberbatch and Keira Knightley, was filmed partly at Bletchley Park and will be released in the UK on November 14.