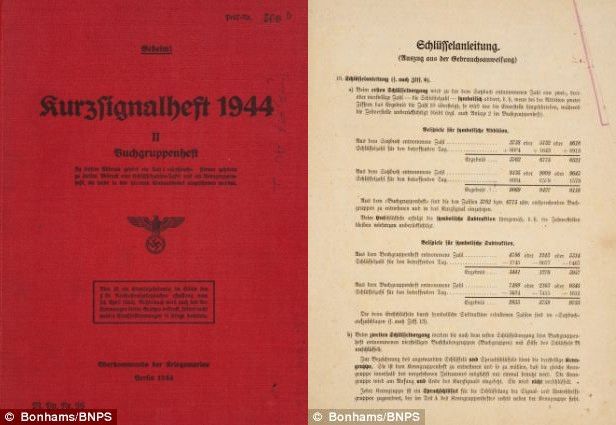 Nazi book full of Enigma codes sold for £87,000: 1944 version was soluble so it could be destroyed in case of capture

A book containing top secret Enigma codes that helped Nazi U-boats evade attack from the Allies has sold for almost £90,000.

Thousands of copies of the book were issued to the crews of the German submarines during the Second World War. But they were soluble and designed to be destroyed by throwing them in the water in the event of capture.
As a result, surviving copies are extremely rare with only two known to exist in public hands today

The one that has sold has been owned by a military collector for many years. The books contained pages of codes used to relay vital information to German battle commanders such as course, enemy reports, position grids or weather updates.

The short signals - called kurzsignale - were developed to counter the effectiveness of the Allies’ ability to track high-frequency transmissions made by the Germans. Before the kurzsignale were introduced, transmissions could last several minutes giving the Allies plenty of time to locate the position of the U-boats using scanners. But the new codes brought transmission times down to under a minute, making it much harder for activity to be tracked.

Sent via an Enigma cipher machine, the messages allowed the U-boat fleets to coordinate their devastating attacks on Atlantic and Arctic convoys with little risk of interception.

The red 12ins by 8ins book - called the Kurzsignalheft - contained tables that converted sentences into four-letter groups and was used for all operational communication. It was designed to dissolve in water - and crews were instructed to destroy their Enigma machine and throw the code books into the sea if captured.

The Kurzsignalheft copy which sold was an updated version of the codebook which was captured along with an Enigma machine by HMS Bulldog in May 1941. The seizure helped Alan Turing’s team at Bletchley Park decipher the Enigma code.

The capture of the machine and the codebooks was made into a film in 2000 starring Matthew McConaughey and Jon Bon Jovi which was condemned in Parliament by then Prime Minister Tony Blair. Mr Blair called the movie, which falsely portrayed the capture of the Enigma machine as an American operation, an ‘affront’ to the British sailors who died in the daring mission.

Experts had expected the 1944 code book to sell for £7,000 but following a bidding war it went for £87,000.
Tom Lamb, from auctioneers Bonhams, said, "These little code books were used by German U-boats to send covert messages back and forth. They had been developed to allow messages to be transmitted very quickly, giving the Allies less time to work out the positions of the U-boats."

"They were water-soluble so the idea was if you were captured you would destroy the Enigma machine and throw the code books in the water. That way precious information would get into the hands of the Allies. The reason for this code book’s value is its rarity - there are only two of these in public hands in the world. One was sold in Britain around 20 years ago but it is incredibly unlikely to see one come to auction again for many years. We knew it was going to sell for a decent amount of money but we had no idea it would do quite so well. It is an indication of just how sought after Second World War memorabilia is."