Richard "Dick" Lynn Bernard, retired National Security Agency Senior Executive, died on June 12, 2019 after valiantly battling leukemia. He was "Dad" to Ann Maris Bernard and "BFF" to her husband Robert G. MacLachlan. He was "Grandad" to Elizbeth and Kirk Walda and Forrest and Leigh Cook. He was "Uncle Dick" to Cara McClelland and Devin Guerrero. He was predeceased by his wife of 55 years, Nancy Gaines Bernard, daughter Jane E. Bernard, and sister Anne B. McClelland.

Mr. Bernard was born on April 30, 1929 and raised in Pittsburgh, PA. He received an Electrical Engineering degree from the co-op Engineering Program at the University of Cincinnati in 1952 and then was awarded a Masters Degree in Engineering Administration from George Washington University in 1955. In 1975 he completed the Executive Course at the Federal Executive Institute. His military career included ROTC at the University of Cincinnati and service as an United States Air Force Officer assigned to NSA in 1953 and 1954. He was one of the first USAF Officers assigned as a computer maintenance engineer at NSA.

Mr. Bernard was a resident of Silver Spring, Maryland for over 50 years, moving to Cincinnati Ohio in 2003. He retired as a Senior Executive from the National Security Agency in 1985 and then worked as a Senior Program Manager at GTE Government Systems Corporation (now part of General Dynamics) until 1995. He returned to NSA to became a part time special consultant to the Center for Cryptologic History at NSA until his death. He authored several histories on some of his NSA activities and served as an advisor on NSA history matters and as an advisor to the National Cryptologic Museum Foundation.

While at NSA, Mr. Bernard initiated the engineering co-op program, managed several large systems development projects and headed several important organizations, as well as a major operations center. He was awarded the NSA Meritorious Civilian Award in 1982, and selected as a charter member of the Senior Cryptologic Executive Service in 1982.

In 2018 he was inducted into the NSA Cryptologic Hall of Honor, created to pay special tribute to the pioneers and heroes who rendered distinguished service to American cryptology. The standards are high for induction into this great hall, and the men and women who have been inducted to the Hall of Honor are all greats in the once silent world of cryptology.

*NCMF note - In May 2019, NSA and NCMF representatives traveled to Ohio to present Dick with his Hall of Honor plaque, as well as other special letters and commemorative items. Read about this special presentation and see photos.

Mr. Bernard was a member of the Phoenix Society (an NSA retiree organization), the National Cryptologic Museum Foundation, several professional organizations, and the Church of Ascension and Holy Trinity Episcopal Church in Cincinnati, Ohio. He enjoyed travel, photography, and golf.

A Celebration of Life for Mr. Bernard will be held at the Episcopal Church of Ascension and Holy Trinity, 335 Burns Avenue, Wyoming, Ohio 45215 on Saturday, June 29 at 10:00 am, with a reception to follow. The family will receive visitors at Evergreen Retirement Community, 230 W. Galbraith Road, Cincinnati, OH 45215 on Friday, June 28 from 5:30-7:30 pm in the Manor House.

Memorial contributions may be made to National Cryptologic Museum Foundation or Donate Online using the NCMF's secure payment page and remember to complete the Tribute Section, indicating your donation is made in honor of Dick Bernard. * NCMF note - the names of those who make donations to the NCMF in Dick's name will be listed as sponsors in his In Memoriam Registry listing. 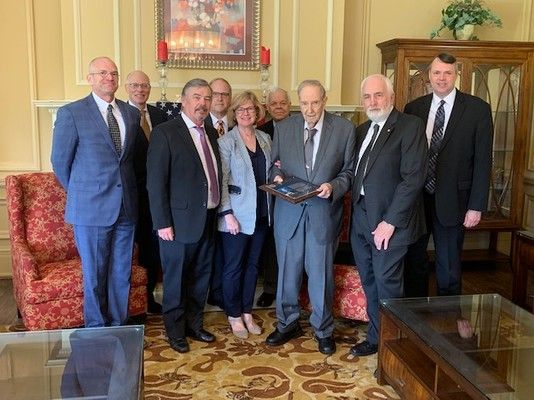