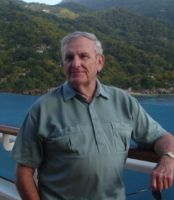 Mr. James "Jim" F. Rogan, 85, a 24-year resident of the Heritage Harbour Community in Annapolis, MD, and previously of Bowie, MD, died on May 21, 2019, at BridgePoint Hospital in Washington, DC.

Born August 22, 1933, in Brooklyn, NY, to the late James F. and Mary Grace Rogan, Jim graduated from the University of Scranton and the Naval War College. He served his country in the U.S. Army from 1953-56. He worked for the National Security Agency, retiring as Comptroller in 1991 with 30 years of service. Jim was a longtime member of St. Mary's Catholic Church in Annapolis, MD and the Phoenix Society. He enjoyed golf, traveling, and spending time with his family.

Friends and family celebrated Jim's Life at the Kalas Funeral Home & Crematory in Edgewater, MD on Tuesday, May 28th. A Mass of Christian Burial was held at Our Lady of Perpetual Help Catholic Church in Edgewater, MD on Wednesday, May 29. Interment at Maryland Veterans Cemetery, Crownsville. In lieu of flowers, contributions may be made to St. Jude Children's Research Hospital, 501 St Jude Place, Memphis, TN 38105.

Jim has been added to the Foundation's In Memoriam Registry. Anyone wishing to donate to the NCMF in Jim's name will be listed as a sponsor.

Obituary from Kalas Funeral Home & Crematory, Edgewater, Maryland.
Condolences may be left on the Memory Wall of the funeral home website.

Sponsored for the NCF's In Memoriam Registry by Mr. Bill Saadi.