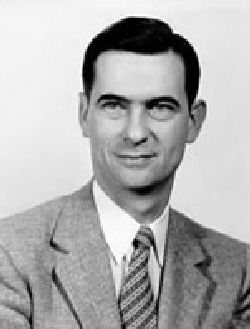 Howard C. Barlow, a graduate of Carnegie Institute of Technology with a B.S. in Electrical Engineering, served in the European Theater in World War II. One of his major assignments was the Communications Planning Officer for the Normandy invasion. While he was overseas, he designed various types of specialized communications equipment.

After the war, Barlow stayed in the cryptologic profession and joined, as a civilian, what later became the National Security Agency. He worked in the Research and Development division as one its first Communications Security (COMSEC) engineers. By 1954, he had risen to the level of division chief.

From 1955-1956, Barlow attended the Harvard Middle Management Program, graduating with a Master's degree in Business Administration.

Returning to NSA, he took a tour in Operations before being named the Deputy Director for Research and Development in 1958. He held this position until 1962, when he was made Assistant Director for COMSEC (ADC), a position that he held until 1973. His insights and management skills created a world-class analytic and engineering organization that was able to meet the communications needs of the Vietnam era and the Cold War. His political skills enabled NSA to forge significant COMSEC relationships with U.S. Allies and become the leader for COMSEC in NATO.

Over a long and illustrious career, Howard Barlow received many awards, including the NSA Exceptional Civilian Service Award in 1967 and, in 1973, the Department of Defense Distinguished Civilian Service Award, the highest DoD award granted to a civilian. This award recognized "his outstanding contributions to the national cryptologic and communications security efforts… [He] applied vigor, imagination, and a high level of managerial skill to a vital and demanding field during a period of unparalleled expansion and rapid technological change. He [was] also a creative design engineer, and in this capacity [was] directly responsible for a number of highly significant technical advances in cryptographic equipment. His dynamic leadership and outstanding professional competence… produced contributions to national security which warrant the highest recognition which can be given an employee of the Department of Defense."