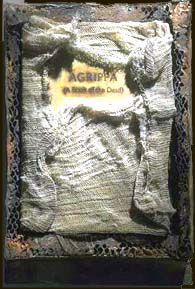 9 December 1992: Premiere of William Gibson's "Agrippa - Book of the Dead" an innovative poetic work released in digital format that immediately encrypted itself after a single use. It remained unbroken for almost two decades.

From Wikipedia: "Agrippa (A Book of the Dead)" is a work of art created by speculative fiction novelist William Gibson, artist Dennis Ashbaugh, and publisher Kevin Begos Jr. in 1992. The work consists of a 300-line semi-autobiographical electronic poem by Gibson, embedded in an artist's book by Ashbaugh. Gibson's text focused on the ethereal nature of memories (the title is taken from a photo album). Its principal notoriety arose from the fact that the poem, stored on a 3.5" floppy disk, was programmed to encrypt itself after a single use; similarly, the pages of the artist's book were treated with photosensitive chemicals, effecting the gradual fading of the words and images from the book's first exposure to light.