Recognizing African American individuals who excelled in their fields, broke down barriers, and created opportunities for generations to come is an important tool for inspiring young African American minds to consider science and technology careers. 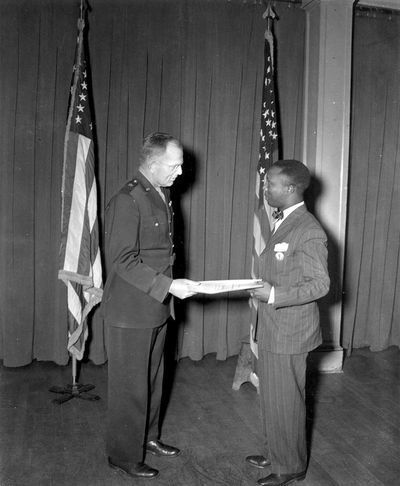 In April 1946, William D. Coffee was awarded the Commendation for Meritorious Civilian service for his wartime leadership in exploiting critical enciphered messages. During a time of harsh racial discrimination, he excelled and became the acting supervisor of a segregated office that made impressive contributions to the nation's cryptologic achievements.

Mr. Coffee was born in 1917 in Abington, Virginia. He studied English at Knoxville College in Tennessee. During the years of the Great Depression, from 1937-1940, he worked in the Civilian Conservation Corps. In September 1941, he was hired as a waiter at Arlington Hall School for Girls. The Army's cryptologic organization soon acquired the property, and, in June 1942, Mr. Coffee was hired as a junior janitor with the Signals Intelligence Service. His supervisors at Arlington Hall Station soon recognized his skills and promoted him to messenger in January 1943. By April he was head messenger.

In November 1944, Mr. Coffee further proved his skills and became Assistant Civilian in Charge of B-3-b with 19 civilian employees under him. B-3-b was a unit tasked to exploit nongovernmental coded messages originating from European, Asian, and Latin American countries. In a later interview with Mr. Benson K. Buffham, who eventually became Deputy Director of NSA, he said that Mr. Coffee was the real expert and head of the unit, running daily operations with impressive efficiency. Mr. Coffee's roles and responsibilities continued to increase to include exploiting diplomatic codes of several countries and managing 30 people who worked in code identification and decoding, researching and analyzing unknown codes, and translating.

After the war, Mr. Coffee's office became involved in an important transcription activity during the Cold War for which he became its officially recognized supervisor in 1947. He joined the Armed Forces Security Agency, NSA's predecessor, and made the transition to NSA.

Mr. Coffee, a pioneer who broke barriers of racial discrimination, left NSA in 1972.

William Coffee led his cryptologic unit with distinction during World War II. His strength of character brought dignity to African-Americans in cryptologic work at a time when discrimination was sanctioned. His efforts made possible the advances toward acceptance of minorities and diversity values in the generation that followed.