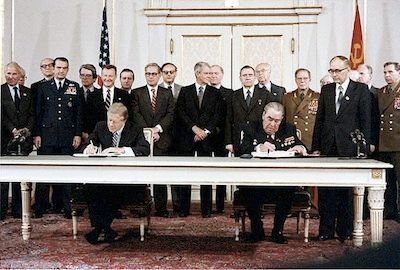 During a summit meeting in Vienna, President Jimmy Carter and Soviet leader Leonid Brezhnev sign the SALT-II agreement (on 18 June 1979) dealing with limitations and guidelines for nuclear weapons. SALT II was a series of talks between United States and Soviet negotiators from 1972 to 1979 which sought to curtail the manufacture of strategic nuclear weapons. It was a continuation of the SALT I talks and was led by representatives from both countries.

Six months after the signing, the Soviet Union invaded Afghanistan, and in September of the same year, the United States discovered that a Soviet combat brigade was stationed in Cuba. (Although President Carter claimed this Soviet brigade had only recently been deployed to Cuba, the unit had been stationed on the island since the Cuban Missile Crisis of 1962.) In light of these developments, the treaty was never ratified by the United States Senate. Its terms were, nonetheless, honored by both sides until it expired.