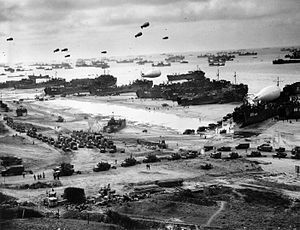 On 1 June 1944, perhaps the most famous jargon code message announced the impending D-Day invasion. It was intercepted and recognized by the German 15th Army, but was ignored at higher headquarters.

"Chanson d'automne" ("Autumn Song") is a poem by Paul Verlaine, one of the best known in the French language. It is included in Verlaine's first collection, Poèmes saturniens (1866).

The first and second lines of the poem (Les sanglots longs des violons de l'automne blessent mon coeur D'une langueur Monotone) were broadcast by the Allies in 1944 as a code message to the French Resistance in preparation for D-Day. When the second line was broadcast over the radio waves, it signaled that the invasion was to come in 24 hours.