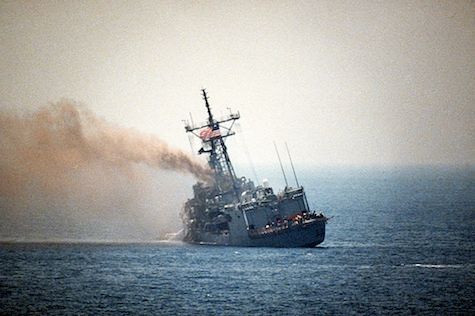 17 May 1987: 37 were killed when Iraqi aircraft fired Exocet missiles at USS Stark. Two missiles from an Iraqi F-1 Mirage warplane struck the USS Stark, killing 37 of the sailors aboard. The frigate was a member of a US naval task force sent to the Persian Gulf to keep the Gulf open for shipping during the Iran-Iraq War. The first missile bored deep into the ship but failed to explode; the second missile exploded, incinerating the crew’s quarters, the radar room, and the combat information center. The ship burned for two days. Twenty nine people died from the initial explosion and fire, including two lost at sea. Eight would later die from their injuries. Twenty-one others survived their wounds.