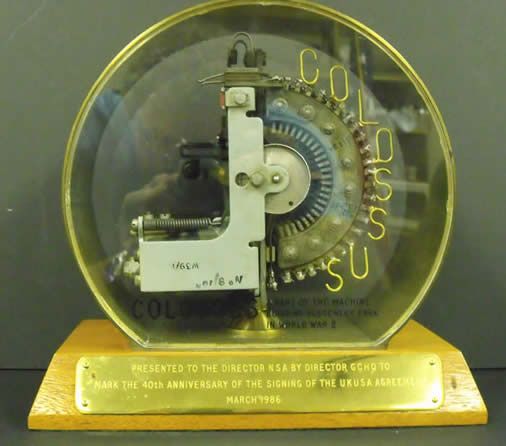 A rare piece of one of the original Colossus computers was acquired from the estate of former NSA Director LTG William Odom. LTG Odom had contacted Dave D’Auria, the Chairman of the NCMF Acquisition Committee (AC) to donate the artifact prior to his passing. The Colossus memento was presented to LTG Odom by GCHQ in 1986 to commemorate the 40th anniversary of the NSA-GCHQ partnership.

Colossus was one of the world’s first programmable digital computers. Two versions of Colossus were built during WW II to decipher German teleprinter messages encrypted using the German Lorenz cipher machine (codename Tunny). The prototype Colossus (Mark 1) became operational in February 1944. The Mark 2 Colossus, both faster and simpler to operate, became operational in June 1944. Eleven Colossus computers were built by the end of the war. Most of the Colossus computers were destroyed at the end of WW II. GCHQ continued to use a few for various computing tasks through the 1950s. A reconstructed Colossus Mark 2 is currently on display at Bletchley Park.

Click the link below to learn about the Royal Mail stamp to honor Tommy Flowers and the Colossus.