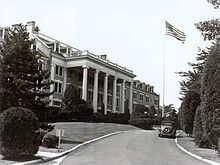 Excerpt from "Origins of the Army Security Agency" on NSA.gov (see link below):

"The SSA was reorganized as the Army Security Agency (ASA) at Arlington Hall Station, Virginia, on 15 September 1945. Operating under the command of the Director of Military Intelligence, the new agency had a sweeping charter. It exercised control functions through a vertical command structure. ASA established a worldwide chain of fixed sites - "field stations" - while maintaining large theater headquarters in the Far East and in Europe.

In 1949, all three military cryptologic services were centralized under the new Armed Forces Security Agency (AFSA), the precursor of today's National Security Agency." ....read more via the link below.....