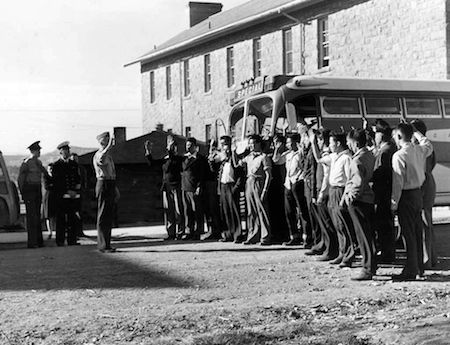 4 May 1942: 29 Navajos reported to Fort Defiance, Arizona, the first of roughly 400 to be trained as code talkers. Make sure to check the links at the end of the page for more articles about the Code Talkers.

Chester Nez was one of the original 29 Navajo code talkers and he lied about his age in order to enlist in the U.S. Marines Corp. Then he and the 28 other Navajo men went on to develop a code based upon their native language. That code became invaluable -- saving lives and enabling the success of many operations. This unbreakable communications system helped ensure the American defeat of the Japanese in the South Pacific.

While the U.S. had adequate cryptographic systems for written communications, the only effective scrambler for voice communications was unsuited for tactical use. The code talkers provided absolute security and speed of encryption and decryption when seconds counted on the battlefield. Their frontline service, keeping U.S. tactical communications invulnerable to enemy eavesdroppers, saved thousands of American and Allied lives.

After the war, the code talkers were instructed to keep their role in the war secret. The code was finally declassified in 1968, 23 years after the war's end. In 2013, the Native American Code Talkers were the first to be inducted as a group into the Cryptologic Hall of Honor. In December 2014, the National Cryptologic Museum updated the Native American Code Talker Exhibit. Don't miss it!