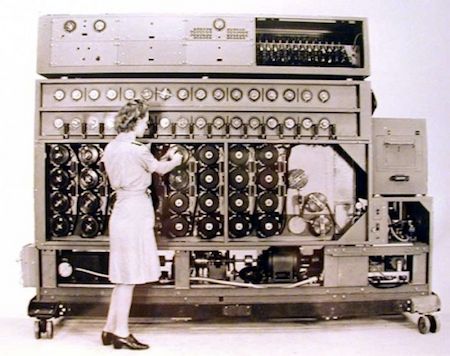 Allied intelligence used cryptanalytic "Bombes" to help decrypt signals encrypted by the German Enigma machine. The "Bombe" deck at the U.S. Navy's Nebraska Avenue building in Washington, D.C. housed over 100 of these 2.5 ton machines. Allied knowledge gained from Enigma assisted in winning the Battle of the Atlantic and facilitated the end of WWII. The National Cryptologic Museum houses the world's only remaining "Bombe."

In the included U.S. Navy photo: A Bombe electromechanical codebreaking machine built at the Naval Computing Machine Laboratory in the National Cash Register plant, Dayton, Ohio. The Bombe shown was in operation in 1943 at the Navy Communications Supplementary Activity on Nebraska Ave. in Washington, D.C. Bombes simulated the rotor movements of the four-rotor Enigma coding machine carried by German submarines. As the war progressed the Bombes were supplanted by much faster all-electronic machines with electronic ring counters simulating the rotors.