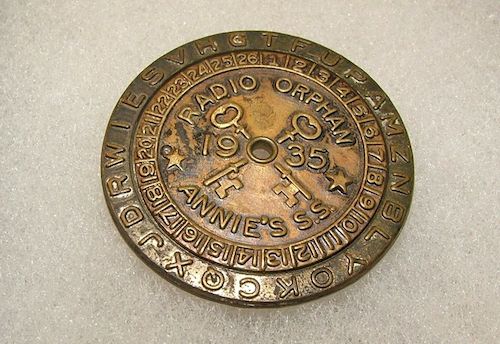 On August 5, 1925, “Little Orphan Annie” debuted in comic strip form. In 1930, the characters were adapted for radio and appealed directly to children. When kids joined “Radio Orphan Annie’s Secret Society,” they received a secret decoder pin. (Not a ring as frequently believed.) The first pin was released in 1935 and different pins were given out through 1940. It used a simple substitution cipher replacing letters with numbers. The numbered ring was in numerical order, but the alphabet ring was always scrambled. During the radio program, a secret message was revealed and the kids used the pin to decipher it. The secret messages gave previews for the next day’s episode.