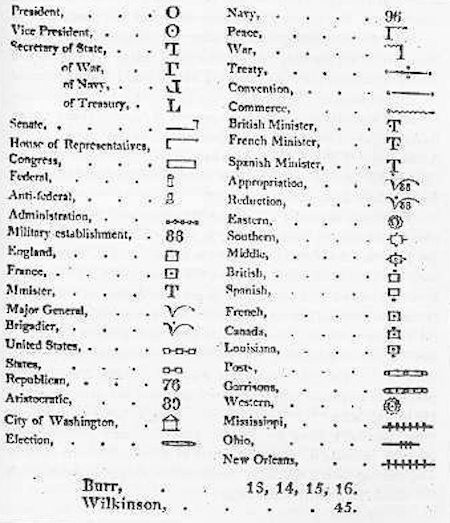 29 July 1806: Aaron Burr’s “Cipher Letter” to General Wilkinson......led to charges of treason against Burr. The Letter was part of the "Burr Conspiracy" -- Aaron Burr's attempt to detach the Western states and the Louisiana Territory from the Union. Pictured here is a portion of the cipher key used in the Letter from Burr to Wilkinson.

Summary: Burr sent a letter in cipher to General Wilkinson in New Orleans announcing he had “commenced the enterprise” and that “detachments from different points and under different pretences will rendezvous on the Ohio” River on November 1. Burr wrote that the troops (pioneer settlers) would be at Natchez in early December to meet Wilkinson. “The gods invite to glory and fortune,” Burr says. Wilkinson eliminates the beginning portion of the letter when he presents it as evidence later, and is caught doing so by Burr.