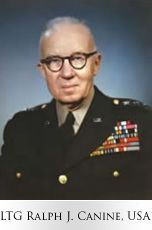 15 July 1951: MG Ralph J. Canine, USA, was named Director, AFSA (the direct predecessor of NSA). He then became NSA's first director. Canine is today credited with lifting NSA out of the chaos that it found itself in by November 1952, and, in the span of four short years, making NSA a top-flight SIGINT organization and a force to be reckoned with inside the U.S. intelligence community.

Read about the life of Ralph J. Canine - the NSA's first director, via the NSA article "Glimpses of a Man," as well as his NSA Hall of Honor page (links below).