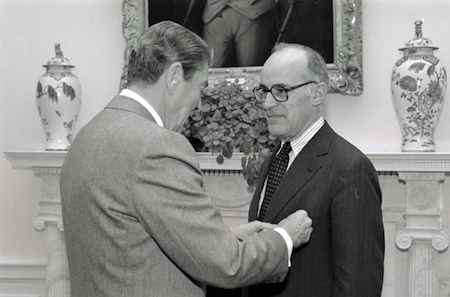 8 May 1985: LTG William Odom, USA, became the Director of NSA. In this photo, President Ronald Reagan is presenting LTG Odom with the National Security Medal.

The citation said the following: "LTG Odom has distinguished himself as an intelligence officer of the highest caliber, a skillful leader and an expert of wide renown on the Soviet Union. As the Director NSA/Chief CSS, he has, through bold initiative, inspired imagination, and unparalleled strength of leadership, set the U.S. Signals Intelligence System on a proper course to meet the formidable challenges of today and of the future. LTG Odom leaves a legacy to this Agency, the Intelligence Community and this country that reflects the ultimate in dedication, commitment and excellence."