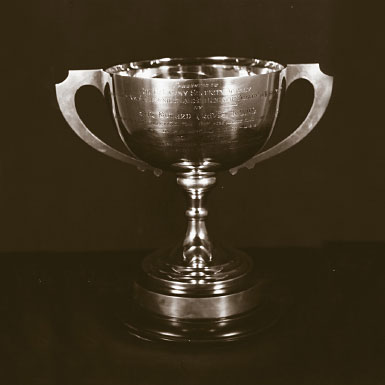 In May 1991, the annual Travis Trophy for operational excellence was presented by President George H. W. Bush at NSA to the Air Force's 690th Electronic Security Wing, Berlin. He also presented the Director's Trophy to the USMC First Radio Battalion, Kanohe Bay, Hawaii. And during a speech outside the OPS 2A Building, he praised NSA employees for their support during the recently concluded Operation DESERT STORM.

The Travis Trophy was initially presented by Sir Edward Travis, first Director, GCHQ, to the U.S. Army Security Agency and the U.S. Naval Communications Supplementary Activity in 1945 as an award for competitive games. In 1964, with the consent of GCHQ Director Sir Clive Loehnis, it was redesigned by former Director, NSA, Lt. Gen. Gordon A. Blake, USAF, as an annual award to be presented to the U.S. Cryptologic field station making the most significant contribution.